With the Congress in recess, Republicans and their rightist allies have taken to the streets to attack President Obama’s agenda, particularly with regard to healthcare. It has already been well documented that much of the protest has been orchestrated by lobbyists and partisan political groups. Their efforts have also been aided by the rightist media including Fox News, the Wall Street Journal, talk radio, etc. The Fox Nation is so heavily involved that it featured eight separate stories on its web site yesterday on the phony town hall disturbances (and four more today). 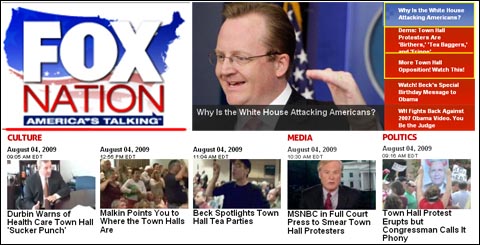 After observing this all-out campaign by insurance industry-backed rightist mobs to disrupt public discourse in town halls and other public events, the Obama administration responded by having White House Communications Director Linda Douglass set the record straight. The video in which she appears is posted on the White House web site along with an invitation for citizens to help debunk the rapidly spreading disinformation:

There is a lot of disinformation about health insurance reform out there, spanning from control of personal finances to end of life care.  These rumors often travel just below the surface via chain emails or through casual conversation.  Since we can’t keep track of all of them here at the White House, we’re asking for your help. If you get an email or see something on the web about health insurance reform that seems fishy, send it to flag@whitehouse.gov.

Naturally, the right wing lie machine immediately seized on this as an outrageous invasion of privacy and an abuse of executive power. They are casting it as a Big Brother style operation to pit neighbor against neighbor. One Tea Partier said that Obama wants to “turn everyone into a Nazi snitch.” The only problem is that nowhere in the appeal is there anything remotely suggesting that people turn in other people. Furthermore, there is no threat associated with the disclosure of the rumors that the White House is seeking to be apprised of. The only thing they are interested in is the substance of the attacks on their proposals so that they can rebut them.

But that hasn’t stopped the allegations of intimidation from erupting out of the depths of the Tea Bagging brigades. Shock and outrage is being expressed from every direction. The National Review, the Washington Times, Hot Air, and of course, Fox News. Fox News has also aired a segment on this in which they revealed that Rush Limbaugh has joining this parade of paranoia. What’s more, both CQPolitics and the Washington Independent have uncovered plots to commit virtual disruptions by spamming the White House’s email inbox.

Even Texas GOP Senator John Cornyn is getting into the act with a letter to the President in which he alleges that this is a Nixonesque enemies list:

“By requesting that citizens send ‘fishy’ emails to the White House, it is inevitable that the names, email addresses, IP addresses, and private speech of U.S. citizens will be reported to the White House. You should not be surprised that these actions taken by your White House staff raise the specter of a data collection program. As Congress debates health care reform and other critical policy matters, citizen engagement must not be chilled by fear of government monitoring the exercise of free speech rights.”

To reiterate, the White House is NOT asking for anyone’s name, email address, IP address, or any other data connected to one’s identity. They are asking only to be informed of arguments against their health care proposals so that they can respond with the facts. Cornyn is reaching new heights of hypocrisy by feigning concern for chilling the exercise of free speech rights when he supports the Tea Baggers who are preventing such speech in local town hall meetings. He further embarrasses himself by saying that he would have also condemned the Bush White House should they have engaged in a similar invasion of privacy. Except that he did no such thing when he voted for warrantless wiretapping.

As it turns out, it is a good thing that the White House now has a facility for reporting the fishy assertions of fatuous fringe dwellers who have trouble with facts. Perhaps we should start by reporting the idiotic claim that the President is recruiting Nazi snitches.