Generally when someone sees things that aren’t really there they are diagnosed as having hallucinations, perhaps in conjunction with psychological disorders like schizophrenia, paranoia, dementia, or other psychoses. But what do you call it when a cable news network suffers from these symptoms?

It seems that everywhere Fox News turns they have visions of “Smoking Guns” that signal the Apocalyptic end of the Obama administration that they despise so fervently. Yet in every case their obsessive imagination dissolves into the ether leaving nothing behind but their impotent outrage. 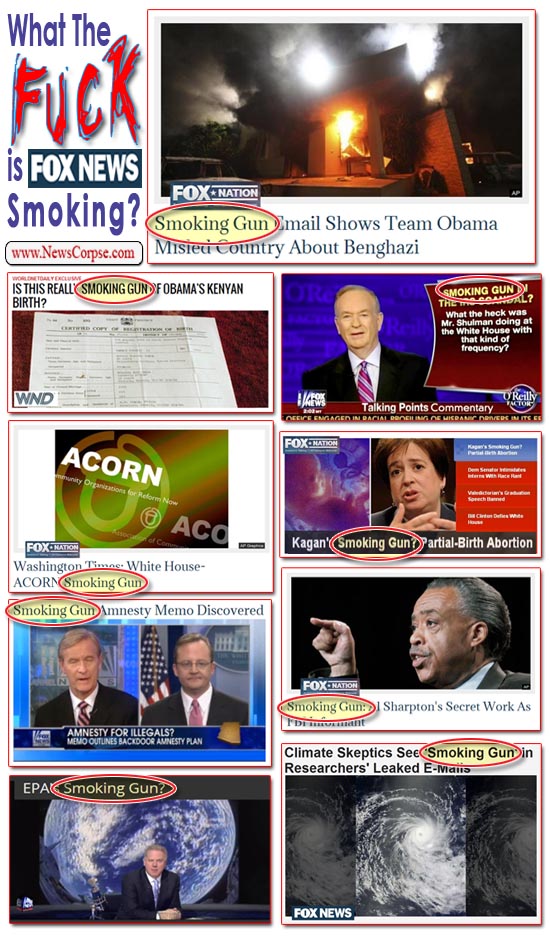 Just to summarize, here are a few of the trumped up “Smoking Guns” as seen on Fox News:

The latest example of this syndrome has manifested in the discovery of an email that the Foxpods are convinced reveals some sort of dastardly plot by the White House to define the tragic assault on an American diplomatic facility in Benghazi, Libya, as a response to an offensive video by an Islamophobic preacher. Their headline blares “Smoking Gun Email Shows Team Obama Misled Country About Benghazi.” It actually doesn’t show anything of the kind, but then none of Fox’s other smoking guns bore any resemblence to reality either. In fact, the whole conspiracy theory doesn’t make any sense because it wouldn’t matter whether the video incited the attack or not. And there is no doubt that if the video were the cause, Fox would be taking the opposite position and attacking President Obama for blaming the terrorists – you know, the cretins who actually slaughtered our citizens.

With regard to the email, Deputy National Security Adviser Ben Rhodes wrote that among the goals of UN Ambassador Susan Rice, as she prepared for a series of Sunday morning news interviews, were “To underscore that these protests are rooted in an Internet video and not a broader failure of policy.” Note that it says “protests” (plural) making it obvious that Rhodes was not referring to Benghazi alone, but rather to numerous hostilities throughout the region. He doesn’t even mention Benghazi in the email until twelve paragraphs later, and then not in regards to this question.

The delusional mindset of Fox and their conservative allies has even constructed a conspiracy around the fact that Ben Rhodes is the brother of CBS News president, David Rhodes. Therefore, there must be a plot between them to coordinate the reporting on this issue in favor of the President. Never mind that David Rhodes came to CBS from Fox News where he was the Vice-President of News and oversaw all of the blatantly partisan, pro-Bush coverage from 9/11 to Katrina to Iraq to the Bush economic collapse. Also, it was under David that CBS broadcast the recent (and now discredited) Benghazi story on 60 minutes that was so harshly critical of Obama. It’s fair to say that David and Ben have different political views. But that didn’t stop the ultra-rightist Heritage Foundation from juicing up the sibling conspiracy, complete with a Twitter-friendly graphic.

Clearly Fox News is deeply disturbed and fixated on finding evidence of malfeasance that will bring the Obama administration crashing down. But when they see smoking guns in every direction, haunting them in their waking hours as if there were substance to them, it really is time to seek professional help. The parade of alleged smoking guns have all amounted to nothing but mirages of the feverish hopes embedded in the twisted psyches of Fox News. And this new one will suffer the same fate.

10 thoughts on “Smoking Gun Delirium Disorder: Or What The F**K Is Fox News Smoking?”