Finally. Media analysts and satirists have chronicled the brazenly partisan and shamelessly deceitful pseudo-news enterprise, known erroneously as Fox “News,” for several years. The disinformation and deliberate lies propagated by disreputable characters like Bill O’Reilly, Sean Hannity, Glenn Beck, Steve Doocy, Megyn Kelly, etc., has all been subjected to appropriate scrutiny and ridicule. But one of Fox’s most embarrassing figures has managed to escape the criticism he so richly deserves. 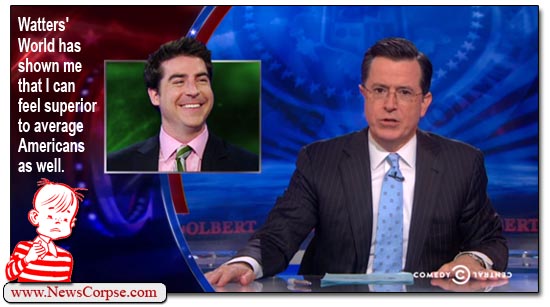 Jesse Watters is a producer on the O’Reilly Factor. He is regularly featured in segments that are intended to be humorous, but rarely achieve that goal for anyone whose sense of humor has evolved beyond kindergarten (in other words, Fox News viewers will love it). The “Watters’ World” bits generally show Watters interviewing “average” people – you know, the “folks” that Bill O’Reilly always claims to be watching out for. Except for when he dispatches his goons to produce heavily edited segments that only show responses from people that fail to give correct answers. That’s because the purpose of the interviews is to make them look like idiots.

It is also worth noting that Watters is the editor of the Fox News community website, Fox Nation. That fact is rarely disclosed publicly and is not credited anywhere on the website. But given the juvenile tone it sets, the horrifyingly violent and racist comments it draws, and the repeatedly false stories it promotes, Watters may have good reason to want to hide his involvement. [For a collection of more than 50 documented examples of blatant lies published by Fox Nation, get the ebook “Fox Nation vs. Reality: The Fox News Cult of Ignorance.” Available at Amazon]

Now Stephen Colbert has turned his biting incite toward Watters in a hilarious segment that demonstrates the dishonesty inherent to what Watters does. Colbert rehabilitates the people that Watters attempts to demean, exposes the cheap tactics that Watters exploits, and does it all with comedic brilliance. Here is the episode for your viewing pleasure: