The biggest media story of the week was clearly the confession by CBS that their big Benghazi Hoax on 60 Minutes had relied on a disreputable figure who had lied to pretty much everyone involved. CBS has now apologized for the broadcast and will issue a correction on the air tonight.

But the question of how the network could have fallen for what in retrospect appears to be a transparent fraud still lingers. The evidence of the falsehoods in their source’s account were easily discovered by reporters who bothered to look. The explanation for CBS’s failure to do so may lie in the identity of the executives in charge of the network’s news operations. 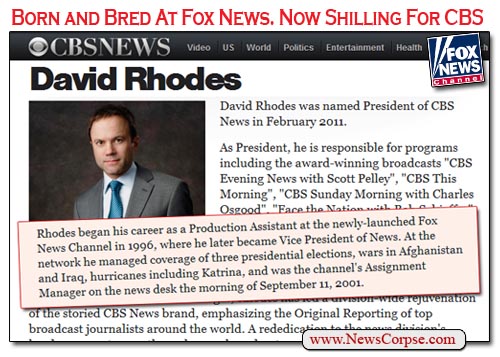 In short, Rhodes was one of the principal architects of the Fox News slant toward far-right extremism and brazen conservative partisanship. CBS News must have known what they were getting when they hired him. Additionally, 60 Minutes correspondent, Lara Logan, has been known to swing rightward, particularly with regard to a militaristic foreign policy.

Following the 60 Minutes episode, much of the conservative media rushed to regurgitate the false accounts presented. Chief among them was Fox News where, the day after the broadcast, Fox devoted 47 minutes to heralding the story as validation of their prior reporting on the issue. That’s three times as long as the original story on CBS. Since then they have spent only 26 seconds (yes, seconds) informing their viewers that the story was utterly false. And the Fox News community website and notorious peddler of lies, Fox Nation, didn’t bother to report the CBS retraction at all.

Given the benefit of this perspective, it is not surprising that CBS would allow itself to be cajoled into believing the fabrications of an obvious grifter. There was such an inbred attraction to his distortion of reality that they were willing to disseminate it to their audience without subjecting it to routine scrutiny. The fact that their source was also the author of a book that was being published by a company that CBS owns and is run by a prominent conservative operative, Mary Matalin, should also have been a red flag. Matalin’s company, Threshold Editions (a division of Simon and Schuster) also publishes books by Glenn Beck, Sean Hannity, Karl Rove, and Dick Cheney. [The Benghazi book has now been pulled from release].