With the resignation of Veterans Affairs Secretary Eric Shinseki, the Republican malice machine has continued to spin at full strength. Whether or not Shinseki was a scapegoat, his departure will not satisfy the bloodlust of the GOP, nor cause them to defer attacks on President Obama long enough to actually help find solutions. However, their inbred negativity and hatred for Obama is causing them to misfire in ways that only further embarrass themselves.

In yet another right-wing assault on the Affordable Care Act (aka ObamaCare), the conservative opponents of health care have once again managed to mangle their message. Their intent has been to associate ObamaCare, which they viscerally despise despite its growing popularity, with the burgeoning scandal at the Veterans Administration. 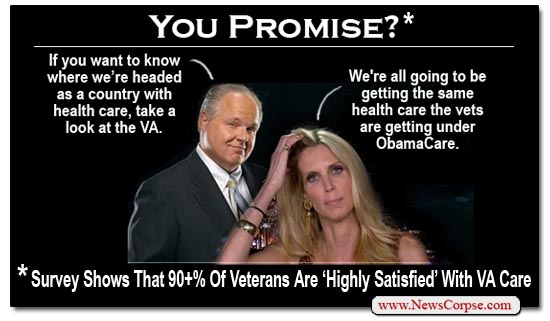 From across the Tea Party frontier we can hear the outraged call of the Yellow Tailed Wingnut complaining that ObamaCare will doom us all to fates of suffering, death, and worse – Socialism! Their high-pitched squeal is recognizable and notable for its uniformity.

To be sure, the VA is undergoing a difficult period, exacerbated by Republicans in Congress obstructing necessary funding and the added burden of hundreds of thousands of new veterans created by Bush’s wars. And there is no excuse for falsifying records in order to mask the problems. But even with the serious issues surfacing in the past few weeks, the VA is a highly regarded institution that serves the vast majority of its patients with compassion and competence.

A recent survey completed in 2013 for the independent American Customer Satisfaction Index (during the precise time period when the latest abuses allegedly occurred) reported that customer satisfaction among veteran patients was “among the best in the nation and equal to or better than ratings for private sector hospitals.” Ratings for satisfaction and loyalty were overwhelmingly positive, exceeding 80% and 90% respectively. And specific responses regarding quality of care were off-the-charts positive.

The positive assessment of the VA’s overall performance, however, does not mean that problems should be ignored. There is obviously room for improvement. Unfortunately, Republicans are not interested in improvement. In fact, they are ideologically shackled to failure. Their whole political philosophy revolves around the belief that government is inept and incapable of doing anything worthwhile (except wage war). Consequently, their mission is to deliberately sabotage every government initiative they encounter.

They aspire to failure because it proves their thesis that the only thing government excels at is failing. And it may even explain why the VA scandal is almost exclusively confined to red states like Arizona, Florida, Missouri, New Mexico, North Carolina, South Carolina, Texas, West Virginia, and Wyoming. Is it just a coincidence that all of those GOP-led states, where local managers are responsible for the VA’s operations, are battling inefficiency and fraud? Or is it consistent with the Republican agenda that is also obstructing the Medicaid expansion provided by ObamaCare in many of those same states?

Still, with broad-based, national survey results delivering such positive assessments, the rest of the country would be overjoyed to receive the sort of care that has pleased the vast majority of veterans. And if, as the wingnut brigade above asserts, the VA represents the future of health care under ObamaCare, then America is in for a real improvement in both medical outcomes and experiences. We can only hope that the Limbaughs and Coulters of the world are right this time, for a change.

3 thoughts on “BACKFIRE: Wingnuts Compare ObamaCare To The VA – Which Most Veterans Love”