Good news was released today about an American soldier who has been held captive for five years. As reported by the Washington Post…

“Sgt. Bowe Bergdahl was handed over to U.S. special operations forces by the Taliban Saturday evening, local time, in an area of eastern Afghanistan, near the Pakistani border. Officials said the exchange was not violent and the 28-year-old Bergdahl was in good condition and able to walk.”

The release was part of a swap that sent five Taliban prisoners held at Guantanamo Bay to Qatar. So not only have we secured the freedom of a captive American, we reduced the population of Gitmo, hopefully leading to its eventual closure. President Obama issued a statement upon Bergdahl’s release saying that…

“Today the American people are pleased that we will be able to welcome home Sergeant Bowe Bergdahl, held captive for nearly five years. On behalf of the American people, I was honored to call his parents to express our joy that they can expect his safe return, mindful of their courage and sacrifice throughout this ordeal. Today we also remember the many troops held captive and whom remain missing or unaccounted for in America’s past wars. Sergeant Bergdahl’s recovery is a reminder of America’s unwavering commitment to leave no man or woman in uniform behind on the battlefield. And as we find relief in Bowe’s recovery, our thoughts and prayers are with those other Americans whose release we continue to pursue.” 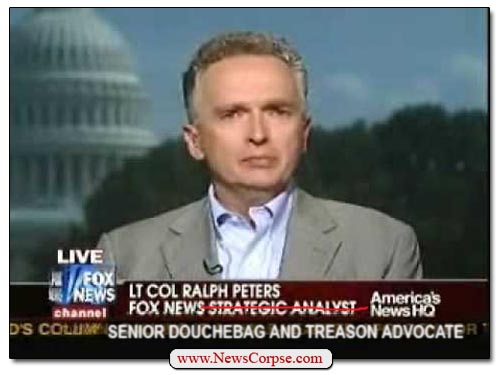 Sadly, not everyone will be pleased about Bergdahl’s homecoming. When it was first reported that he had been captured, Fox News brought in their “strategic analyst” Lt. Col. Ralph Peters to offer his opinion on the matter. Whereupon Peters, without any evidence, declared that Bergdahl was a liar, a deserter, and that “the Taliban can save us a lot of legal hassles and legal bills,” presumably by killing him. (Watch here)

Peters also appeared on Bill O’Reilly’s show where they both demeaned Bergdahl as “crazy,” showing little sympathy for his plight or the suffering of his family. This prompted a bipartisan assembly of congressional veterans to speak out about Peters’ viciously unpatriotic remarks. They sent a letter to Fox News Chairman Roger Ailes saying in part…

“As members of Congress and veterans of the United States Armed Forces, it was with incredulity and disgust that we watched Fox News Strategic Analyst Lt. Colonel Ralph Peters (Ret.) suggest on your airwaves that Private First Class Bowe Bergdahl, ‘abandoned his buddies, abandoned his post, and just walked off,’ and stated that, if this is true, ‘the Taliban can save us a lot of legal hassles and legal bills.’” […]

“We demand an apology to PFC Bergdahl’s family and to the thousands of soldiers who put their lives on the line for our country. As a member of the military family, Mr. Peters should measure his remarks and remember that the United States will never abandon one of its own.”

They never received an apology, so presumably Peters still wishes that Bergdahl had been executed by our enemies rather than being freed and sent home. O’Reilly never apologized either. Instead, he hosted Peters just a couple of days ago and, barely containing his slobber, told Peters that he should be the successor to outgoing Veterans Affairs Secretary Eric Shinseki.

That’s just what the VA needs. A treasonous miscreant who advocates for American soldiers to be murdered by terrorists. Contributing further to his resume for VA Chief, Peters has also called for military attacks on the media. He alleged that Obama seeks common ground with Al Qaeda. And he is part of the Fox congregation that adores Vladimir Putin.

As repugnant as Peters is, the fact that Fox News keeps him on the payroll despite these repeated, anti-American commentaries, is unfathomable. Apparently Peters fits in well with the cretinous world view of his Fox comrades Roger Ailes and Rupert Murdoch.