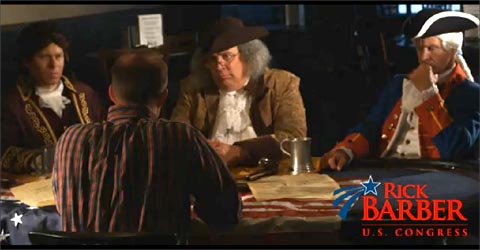 The new campaign ad for Alabama congressional hopeful, Rick Barber, is going to anger some very prominent people. The unintentionally hilarious ad features Barber playing the role of a modern revolutionary recruiting Sam Adams, Benjamin Franklin, and George Washington, into a conspiracy against the IRS, health care, and President Obama. The high school quality playlet concludes with Barber asking the founders if they are with him. To which Washington replies, “Gather your armies.”

First of all, historians will be shocked by the numerous inaccuracies crammed into the sixty second commercial. Then there are the veterans who would be offended by the suggestion that armed insurrection against the U.S. is an acceptable form of political dissent. And other patriots will object to these pretend revolutionaries using the American flag as a table cloth. And, of course, Stephen Colbert will likely want to sue Barber for appropriating his persona (but not nearly as funny).

But who could have anticipated that Glenn Beck would emerge as the harshest critic of Barber? Beck called Barber “a dope” and said that he is “one of dumbest people I have seen.” You have to wonder what would set Beck off to this degree. After all, Barber’s ad was as close to a tribute to Beck as could be imagined. He featured Beck’s three favorite Founders. He mirrored Beck’s disingenuous devotion to the Constitution. He covered the conspiratorial territory that Beck plods incessantly. He did everything but genuflect and chant Beck’s name. Beck even prefaced his criticism by saying that he agreed with Barber’s description of the IRS.

So why is Beck so outraged and offended? Perhaps the answer lies in these remarks by Beck on his radio program today:

Setting aside the vomiting Founders, Beck tells us here precisely why he’s mad: Barber jumped the gun, and in the process, spilled the beans. Beck isn’t upset at Barber for overtly advocating violent rebellion. He’s upset that Barber spoke too soon. Beck isn’t ready yet. And Barber committed the cardinal sin of upstaging Beck and usurping his role as the Messianic leader of the revolt.

This conclusion is painfully obvious. Why else would Beck get so worked up over a call to “gather your armies?” The last sentence of his new novel (released today by coincidence(?)) menacingly declares…

“We’re everywhere. Stay with us. I’ll see you soon. The fight starts tomorrow.”

How exactly is that different than Barber’s call to arms? OK, Beck’s book is fiction, or as he calls it, “faction.” Beck says that the events in the book are made up, but he also says that the ideas are rooted in the truth. But Barber’s ad is not exactly non-fiction, given that he is seen conversing with long-dead historical figures.

So there really is no difference between them other than Barber’s audacity for getting out in front of Beck’s parade. Beck has an event coming up in August that is scheduled to be the launch party for his next book, “The Plan,” a 100 year blueprint for the restoration of America. I can understand why Beck would be angry at Barber for stealing the thunder he hopes to rain down on his disciples. He has been planning for the release of The Plan for months. How dare Barber spoil it all by promoting his own crackpot schemes to get elected to Congress? That’s what Beck is so infuriated by. Beck will lead his troops into battle when the time is right and not before. And woe be to anyone who imperils his plot or gets in his way.

Bonus Hypocrisy: Keith Olbermann also criticized Barber’s ad, but Beck found no common quarter with him. In fact, Beck bashed Olbermann as a…

“…two-faced, no talent, soon to be washed up, alcoholic, throw yourself off the ledge of a building cause you such a loser, kind of guy.”

So when Beck calls Barber out it’s righteous indignation. When Olbermann does it, it makes him a loser. More importantly, I’ve never heard any suggestion that Olbermann was an alcoholic. But Beck’s litany of insults paint an accurate picture of Beck himself. Beck is a former abuser of alcohol and drugs. He admits to being suicidal on multiple occasions. He has lost about half his audience since the beginning of the year. And neither of his faces have any talent.

4 thoughts on “Rick Barber Spills The Beans, Glenn Beck Froths At The Mouth”