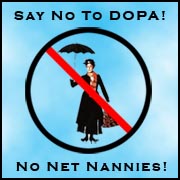 In May, I wrote about The Deleting Online Predators Act (PDF), a bill designed to ban access to social networking sites from schools, libraries, and other federally funded locations. Unfortunately, the language was so broad that the bill would end up banning everything from MySpace to Wikipedia, and everyone on Blogger, Live Journal and DailyKos. Well, the bill passed yesterday by a whopping 410-15 margin. Despite having been trashed in committee, the sponsors revised it and pushed it to the House floor without further discussion. And the Republican members pointedly excluded any Democrats from participating in the revisions.

In the new version, the definition of social networking is being left up to the FCC, but the criteria for consideration is almost identical to the original bill:

In determining the definition of a social networking website, the Commission shall take into consideration the extent to which a website-

If the bill becomes law, we will have FCC Chair Kevin Martin in charge of implemementing it. Martin is a long-term Bush crony who, among other things, was part of the Bush campaign’s legal team in Florida after the election in 2000. His stewardship of the bill could actually result in a worse outcome than the original draft.

There is speculation that the Senate is poised to quickly pass its version of the bill. This would be a good time for online advocates, and especially users of MySpace, Facebook, Blogger, and any other social networking site or forum, to start making as much noise as possible.

Here is your assignment:

Number 3 is particularly important. If we can get this message to blast across MySpace, and other social networks, the impact could be profound. These are the communities that would be most directly affected and they should be willing to help spread the word.

This bill will also disproportionally hurt low income kids who rely on public terminals to get online. But it won’t stop there. Remember, they want to ban access now from schools and libraries. Next it will be any public terminal, like cafes and WiFi sites. And they will just keep going until they achieve a universal ban. Believe it!