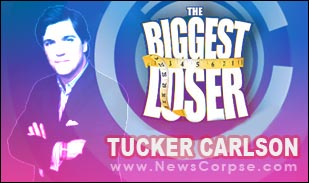 If there were a contest for Most Pathetic Pundit, Tucker Carlson would get the Lifetime Achievement Award. He has been a recidivist failure on PBS, CNN, and MSNBC. After being canceled more times than a Shane MacGowan dentist appointment, Carlson was picked up as a pity play by Fox News, an organization he previously called “…a mean, sick group of people,” but for whom he now dutifully performs his organ-grinder monkey routine.

Now Carlson is proving that he is not merely an incompetent boob, but a hypocritical jerk as well. With the brashness of a child delighted at his ability to pull the wings off a fly, Carlson has announced that he, and his web site the Daily Caller, has acquired ownership of the domain name KeithOlbermann.com:

“This is part of our long-term growth strategy,” added Publisher and CEO Neil Patel. “Our future acquisition targets include several other annoying cable news commentators.” 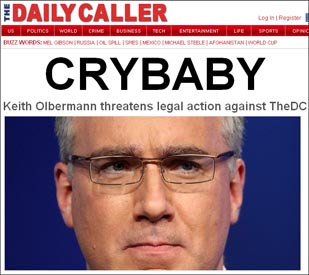 That seems like a brilliant business plan, and in keeping with their mission, having been founded by one of the all-time annoying cable news commentators, Carlson himself. On today’s front page of the the Daily Caller is a big, close up photo of Olbermann beneath an all-caps headline shouting, “CRYBABY.” The sub-head says, “Keith Olbermann threatens legal action against TheDC.”

This is a typical case of cybersquatting, wherein someone takes possession of an Internet asset that belongs to someone else. Domain names are subject to laws that protect intellectual property, trademarks, and copyrights. The hypocrisy comes into play when you learn that just two years ago. Carlson pursued a complaint against someone squatting on his domain name. He filed his complaint with the World Intellectual Property Organization and won a decision to reclaim his name. The complaint said in part…

Apparently Carlson is “internationally famous” for getting canned repeatedly. It is also notable that just a couple of years ago it was Carlson who was the crybaby. His complaint conveniently outlines the very same arguments that Olbermann could make to retrieve ownership of his domain name. He even damages his own case by confessing that he intends to use the name for a commercial purpose.

As an added bonus, Carlson implied that Olbermann would be infringing on his First Amendment rights if he were to sue Carlson for the name. Of course, having to turn over the name does not in any way restrict Carlson from speaking. Especially since the name is only being used presently to pull up the Daily Caller home page. And accusing Olbermann of violating his rights would also be admitting that he violated the rights of the party he sued to get his name back.

So go ahead and cry about it, Tucker. You are only affirming your place in history as a miserable louse with no talent, intellect, or ethics. But most of us already knew that.

3 thoughts on “Tucker Carlson vs. Keith Olbermann: Master Of Your Domain”