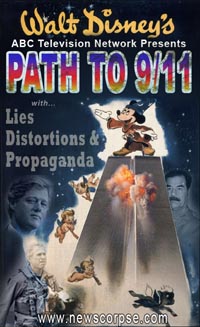 The Disney-ABC croc-udrama, Path to 9/11, is starting to get the treatment it deserves in the blogosphere and even some of the cable news nets. But I wanted to tie this hit piece more securely to the description of what it really is. So I thought that I would initiate a Google bomb effort to associate the program’s title to the word propaganda. First, I checked the obvious – is there a Propaganda.com?

Guess what? The URL redirects to Open Letter to ABC, a clearinghouse of info and links related to the show and how to respond. It appears to be the work of Matt Stoller of MyDD. Thanks Matt, you’ve saved me a lot of work.

Update: Here is a link to some more info on the folks behind the scenes of Path to 9/11 – A motley crew of villians that include David Horowitz, Richard Mellon Scaife, and the Liberty Film Festival.

Also, the president will be making a speech on the evening of Monday, 9/11, for which ABC will likely have to interrupt their program. Does anybody else get the feeling that this is an intentional move to insert the President’s comments into the program so that it will almost appear as if he is a sponsor and/or is associating the White House with the movie?