This weekend there was a conference held in Garland, Texas by a Muslim organization hoping to address the negative stereotypes disseminated by the media and racist politicians. The event was met with opposition by a small band of protesters whose vulgar behavior illustrated the need for the conference in the first place. Not surprisingly, Fox News offered coverage of sorts by posting a link on their Fox Nation website to an article in the ultra right-wing Washington Times. The piece led with the headline “‘Stand With Prophet’ Event In Texas Draws Thousands Of Protesters.” 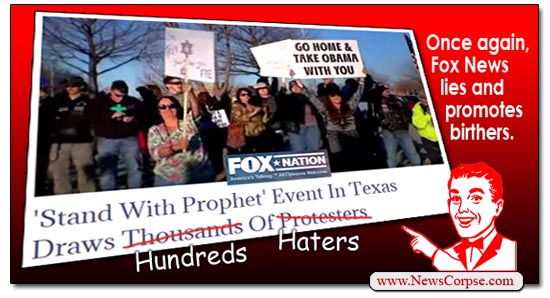 The first problem with the story is that there were not “thousands” of protesters. The attendance was reported by media at the scene as being a few hundred, and that included people who were supporting the event.

However, much worse was the tone of the protesters who were overtly hostile to a group whose purpose was to renounce terrorism, repudiate violence, and seek harmony with their fellow American citizens. The conferees stated mission was to make clear that terrorists like ISIS and Al Qaeda are “enemies of Islam who are hurting Muslims and neighborly relations toward the world.” They were met with angry accusations that “You are not Americans. Don’t fly our flag,” and demands that “If they want to live their life like the middle east, they can go back to the middle east.” It’s unlikely that these malcontents would make the same demands to banish orthodox Jews or the Amish.

It is notable that the photo chosen to represent the allegedly patriotic protesters included one carrying a sign that said “Go home and take Obama with you.” Not only was this an exclusionary sentiment that falsely implied that America was not their home, it also revived the idiotic delusions of birthers who still can’t accept that Obama was born in the U.S.

The purpose of the conference, as stated on its website, was to “develop effective responses to anti-Islamic attacks, as well as to train young Muslims in media.” Clearly that is a goal that has been validated as necessary if the coverage of this event is any indication. The story was carried with the same negative slant, and false attendance estimates, by much of the conservative media. And the wretched prejudices expressed by the protesters proves that there is still a great deal of work to be done.

Hopefully cooler, less intolerant heads will prevail and citizens of all races, religions, and origins will be able to come together to defeat bigotry in all its vile forms. But that will not happen until media outlets like Fox are shamed into abandoning their own biases that serve no purpose other than to inflame the ignorant and empower racist, political demagogues.