In the upcoming State Of the Union speech, President Obama is expected to call for a variety of tax reforms aimed at helping the middle-class to finally participate in the nation’s historic economic recovery. The proposals comprise a common sense approach that recognizes the harm caused by income equality and are supported by a majority of the American people. They include…

The funds raised from these measures would be used to provide enhanced benefits for middle-class taxpayers. For instance, there would be a new $500 credit for working families, improved retirement savings plans, an increase of the tax credit for childcare to $3,000 per child, and free tuition at community colleges.

So how does Fox News present this plan to the readers of their Fox Nation website? They shamelessly spin it to portray the measure as exclusively tax hikes and ignore the tax cuts and other benefits that most citizens will receive: “Still Not Paying Your ‘Fair Share’? Obama To Seek Billions In New Tax Hikes” 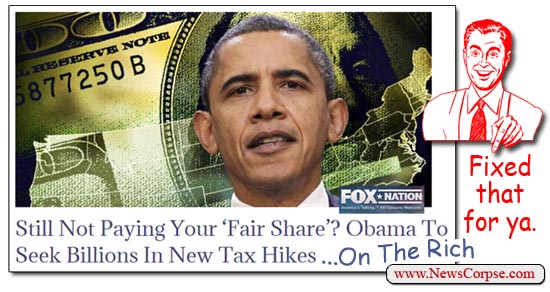 Fox fails to point out that those who would pay more under this proposal are the few one-percenters who have benefited most for the last six years as the stock market has soared to record levels and corporate profits exceeded all previous highs. They can certainly afford these modest increases and they owe it to the country to let the other 99% enjoy some of the success for which we are partly (mostly) responsible.

Throughout most of the 2012 election season, Republicans, along with their PR allies at Fox, were quick to point to the one economic metric that has failed to keep pace with the rest of the recovery: middle-class wage growth. They tried to use this as as evidence that Obama’s policies were not working, despite all of the other evidence of unparalleled progress. And even as they made this disingenuous argument, they opposed any solutions that would actually address the problem. They obsessed over Benghazi and Ebola and gay marriage and repealing ObamaCare, rather than getting behind infrastructure funding to create jobs or raising the minimum wage, two obvious initiatives that would directly improve the lot of the middle-class.

Now Republicans are already declaring Obama’s tax reforms to be “dead on arrival” in the newly fortified GOP Congress. They are just as obstructionist as ever when it comes to helping working Americans. And they are just as obstinate as ever when it comes to protecting the wealth of the corporations and individuals who shower them with campaign cash. Consequently, it is unlikely that these measures will pass any time soon, but they will become fodder for debate during the 2016 presidential election cycle.

For More FoxBS Get the ALL NEW 2nd volume of
Fox Nation vs. Reality: The Fox News Cult of Ignorance.
Available now at Amazon.

So which side do you think the people will be on? Especially if the GOP nominee is the Original Bankster, Mitt Romney, or the next in line in the Bush Dynasty, Jeb Bush (whom the overlord of Fox News has already endorsed)? The remainder of the field aren’t any better on matters of economic fairness. They are a cabal of extremist Ayn Rand disciples who regard the less fortunate members of society as scum who deserve their lowly place. And with the way that the Fox Nationalists are characterizing the President’s proposals it’s clear that they mean to actively assist the GOP/Tea Party in misleading their flock and advancing the interests of the super-rich.

3 thoughts on “Fox Nation vs. Reality: Billions In Tax Hikes Are Actually Cuts For Most Americans”