The Republican presidential primary has utterly devolved into a festival of crotchety buffoons whose most steadfast goal is to attract more publicity than their current front-runner, Donald Trump. However, it says something rather pitiful about a collection of GOP candidates that are repeatedly upstaged by a boorish TV reality show host. That’s gotta hurt.

Consequently, every so often one of them will take a wild swing for fences to see if they can sponge up a little attention. Doing so almost never involves contributing something meaningful to the discourse on government, politics, or society. No, it usually means sinking to lower levels of dumbfuckery than Trump himself. And the latest contestant to step up to the plate is Sen. Ted Cruz, who in the pre-Trump era was the undisputed champion of the lunatic fringe. 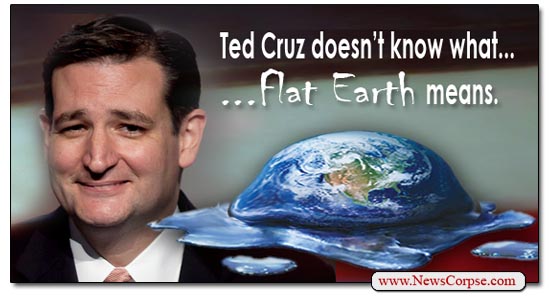 Speaking at gathering of wealthy Republican donors sponsored by the wealthiest of them all, the Koch brothers, Cruz addressed the subject of Climate Change. He began by making the bizarre assertion that the vast majority of scientists whose studies prove that Climate Change is a real and imminent threat, are “Flat-Earthers.” That’s right, he used the phrase that ordinarily mocks those who reject science against actual scientists. And he used it to reject science.

You have to give Cruz some credit for managing to pull off this daring escape from reality with a straight face. And undoubtedly the imbeciles listening to this tripe will soak it up eagerly since they have already demonstrated that their capacity for rational comprehension is at or near zero. Cruz went on to dismiss Climate Change as a hoax saying that…

“If you look at satellite data for the last 18 years, there’s been zero recorded warming. The satellite says it ain’t happening … They’re cooking the books.” […and that…] “It is always disturbing to hear science use the language of theology. Deniers. Heretics. That’s not what science is supposed to be about. Science should follow the facts.”

Indeed. Science should follow the facts. And with 97% of scientists who have studied Climate Change agreeing that it is real and is caused by humans, the facts are not in doubt. What’s more, Cruz’s complaint about the “language of theology” comes entirely from his warped imagination. The term “deniers” was previously used mostly with reference to fake historians who claimed that the Holocaust never occurred. That is not a theological reference. And I would wager that Cruz could not cite a single instance of someone referring to Climate Change deniers as heretics.

As for Cruz’s claims about satellite data, cooked books, and the alleged absence of any recorded warming, he is obviously working from materials provided by the same Exxon lobbyists who previously worked for cigarette companies on the health benefits of tobacco. Because if he had asked the scientists at the National Oceanic and Atmospheric Administration they would have told him that the planet has been steadily warming for decades and that 2014 was Earth’s warmest year on record. And that 2015 is on track to surpass 2014.

This isn’t the first time that Cruz has wondered from the realm of reality by flipping the concept of flat-Earthers. Back in May he said much the same thing while adding that he and other science-deniers were modern-day Galileos. The only problem with that is that it is bass-ackwards. Galileo was persecuted for advocating theories derived from scientific method (like the 97%). His critics, mainly the Catholic Church, rejected his work because they were committed to preserving long-held myths that benefited the status quo (like Koch brothers). So Cruz assuming the mantle of Galileo is a complete reversal of logic. He’s the one using an unsupported belief system to supplant today’s Galileos who rely on actual science.

Perhaps the funniest diversion from sanity in Cruz’s speech was his ludicrous reasoning for why Democrats are pursuing Climate Change as an issue. First, he says that they plan to use it as a means to assert total control over … EVERYTHING! It’s all part of a grand conspiracy that concludes with universal slavery to environmental dictators forcing people to live with clean air and water in a habitable climate. The fiends! And even worse, Democrats only pretend to care about the issue in order to please the army of environmentalist billionaires (we all know how numerous and bloodthirsty they are) and to gain access to their campaign donations. Keep in mind that Cruz was offering this ominous conspiracy theory to a room full of some 450 wealthy campaign donors assembled by the Koch brothers from whom he is seeking donations.

The only question for Cruz is, is this blockheaded stunt crazy enough to steal back some of Trump’s thunder? In ordinary times it would have more than sufficed. But these are not ordinary times. Trump has advanced the idiocracy to new, unforeseen heights. If Cruz really wanted to clinch the deal he should have accused the scientists of aiding and abetting ISIS, or thrown in a reference to environmentalist Nazis like Mike Huckabee did with Planned Parenthood. Now that’s how you out-Trump Trump.