Coming on the heels of his bizarre Trumpian assertion that environmentalists are flat-earthers, Ted Cruz released a video that seems to cement the already widespread impression of the American redneck as a borderline deranged nut case. 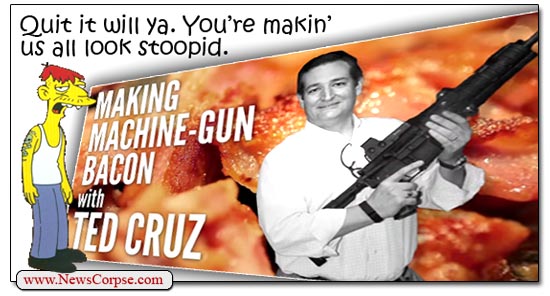 In the video (posted below) Cruz is seen at a firing range where he expresses his appreciation of cooking breakfast with his family on weekends. Then he adds “Of course, in Texas we cook bacon a little differently than most folks.” He then proceeds to wrap a few strips of bacon around the muzzle of an AR-15 and fire it at a target. After which he picks a piece of the bacon off the muzzle with a fork and eats it. Eww. It’s not exactly sanitary.

What exactly is the point of this video? Is it Cruz’s intention to reinforce the negative stereotype of Texans and southerners as corpulent, pork-encrusted, gluttons, and skeevy, gun fetishing hicks? Because that’s what he’s doing as he reinforces two of the most repugnant attributes commonly associated with the hillbilly culture to which he seems to be appealing.

Let’s face it, this is nothing more than a desperate cry for attention by a candidate who has rapidly sunk into near oblivion. His poll numbers have been cut in half in the last few months. But if he thinks that frying cured pig flesh on a rifle barrel is the way to attract more voters he is shooting blanks. He is only proving that he knows nothing about either food or guns.

Candidates like Cruz are adopting the scripts of reality television to ramp up their ratings …er… votes. It might be referred to as the Trump effect (although Sarah Palin was there first), and it is turning democracy into a pathetic season of Keeping Up With The Republicans.

One thought on “Romancing The Hicks: Ted Cruz Makes Bacon With A Machine Gun (Video)”