The Republican’s favorite jingoistic blowhard, Donald Trump, has made immigration the centerpiece of his alleged presidential campaign. Not that he’s proposed any coherent policies or solutions. That would only distract from his hate-speech and fear mongering. No, The Donald’s stunted ability to comprehend complex issues is limited to demonizing his perceived enemies and building walls. And he has the audacity to believe that after insulting Mexican immigrants as criminals and rapists that American Latinos will still vote for him. 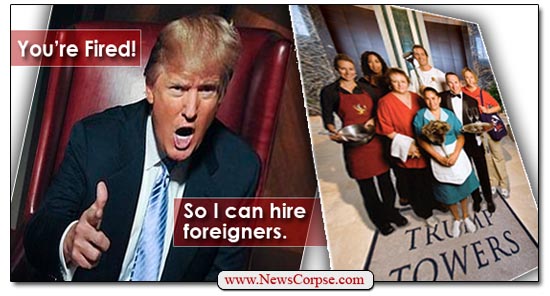 Among the many things that Trump is convinced he can do better than any other mortal is creating jobs. Never mind the fact that it has always been a lie that the wealthy are job creators (Here is an infographic showing who the Real Job Creators are). And set aside that Trump’s businesses have long outsourced American jobs to China and elsewhere. He nevertheless said in his presidential campaign announcement speech that “I will be the greatest jobs president that God ever created.” This is a meaningless boast, and not just because he doesn’t have any respect for God.

Reuters is reporting that Trump’s businesses “have sought to import at least 1,100 foreign workers on temporary visas since 2000, according to U.S. Department of Labor data.” It is notable that these are not the sort of hard-labor jobs in agriculture or construction for which it is sometimes difficult to recruit. The jobs Trump was seeking to fill were for maids, cooks, wait staff, and even golf-course superintendents, and hotel and banquet managers. These are sought-after positions in luxury resorts. They are also positions for which the employer must certify that “they tried and failed to hire Americans.”

So Trump expects people to believe that he was unable to find Americans to fill these jobs. Yet he still expects people to believe that he will be “the greatest jobs president that God ever created.” And perhaps he will, just not for American workers. It’s likely he is seeking people that he can exploit by paying less and treating badly. What’s more, the foreign workers he is employing are the very same ones that he is disparaging as rapists and promising to deport en masse. Reuters notes that…

“The temporary work visa program through which Trump’s companies have sought the greatest numbers of workers, H-2B, brings in mostly workers from Mexico. Mexicans made up more than 80 percent of the 104,993 admissions to the United States on H-2B visas in 2013. The Trump companies have sought at least 850 H-2B visa workers.”

It will be interesting to see if Trump’s stubbornly stupid supporters will hold him accountable for this slap in the face to American labor. Will they make him pay for his outrageous hypocrisy? Judging from the past few weeks, maybe not. If they weren’t offended by his racism, or his disrespect for POW’s, or his rebuke of God, then perhaps they aren’t bothered by hurting the American work force (and lying about it) either. After all, if you’re dumb enough to support Trump in the first place, you’re probably too stupid to figure out when you’re being screwed.

4 thoughts on “Donald Trump: Bringing Back Jobs – And The Foreigners To Do Them”