When Hillary Clinton coined the term “Vast Right-Wing Conspiracy” twelve years ago, many members of the VRWC ridiculed her and denied their own existence. Now Think Progress is in receipt of a private memo from the billionaire Koch brothers inviting some of the country’s wealthiest and most powerful individuals and companies to a clandestine meeting last summer where they would strategize for the upcoming midterm elections. It’s a fascinating story that includes in-depth research on the participants in this cabal and their connections to political players and institutions.

The part I’m most interested in is the presence of the media in the group. Take a look through the list of participants and you can’t help but notice one name that keeps repeating: Fox News. Here is a list of the Fox News affiliated members of the Koch Klan:

What’s striking about this is that these people are not attending the secret meetings as journalists. They are participating in the brazenly partisan campaign planning conducted by the biggest business special interests in the world. These media players are not bystanders. They are the architects of the conservative agenda. They join their boss, Rupert Murdoch, in this endeavor. Murdoch, it was recently revealed, has donated millions to the U.S. Chamber of Commerce and the Republican Governor’s Association.

All of the usual suspects were present at the secret meeting, from the Chamber of Commerce to Big Oil to the pharmaceutical giants to defense, real estate, Wall Street, and the top right-wing think tanks. The attendees even included a couple of Supreme Court Justices, Antonin Scalia and Clarence Thomas. Talk about your activist judges. After attending these meetings (which reportedly occur biannually, with the next one set for Palm Springs in January), these media hucksters return to the airwaves to promote the agenda they helped to fashion. And, of course, there is no disclosure that they had a hand in the policies they are peddling. 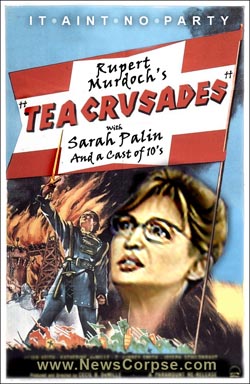 This is another example of a phenomenon that is increasingly confounding to me. How can the Tea Party, who describe themselves as average, middle-class, Americans who are seeking to restore Constitutional principles and make Washington accountable to “We the People,” continue to follow an elite assembly of wealthy corporatists whose interests are so far removed from those of the Tea Party? Why doesn’t the Tea Party, who fancy themselves as revolutionaries, revolt against these upper-crusty impostors who are so obviously trying to manipulate their movement to the benefit of their elite and wealthy friends? What sort of revolutionaries align themselves with the entrenched establishment?

If the Tea Party had any sense they would be repulsed by Glenn Beck, Sarah Palin, Fox News and the business-allied GOP. They would reject these phonies who are perverting the movement they claim belongs to the people. They would refuse the dirty money flowing from the Koch brothers, the AstroTurfers (i.e. FreedomWorks, Americans for Prosperity, et al), and foreign financiers like the Chamber of Commerce and Rupert Murdoch.

But then again, if the Tea Party had any sense they wouldn’t be the Tea Party as we know it. They are a sad crowd of gullible malcontents, and the more I contemplate their role in contemporary society, the more I pity them. I just wish their pathetic endeavors and delusions didn’t also cause the rest of the country suffer.

3 thoughts on “Fox News: Architects Of The Vast Right-Wing Conspiracy”