It’s the most wonderful time of the year. The time when the War on Christmas warms the cockles (whatever they are) of American patriots as they prepare to celebrate the release of another Sarah Palin book: Sweet Freedom: A Devotional. Palin’s latest butchering of the English language “invites you to draw strength and inspiration from 260 meditations based on guiding Biblical verses.” 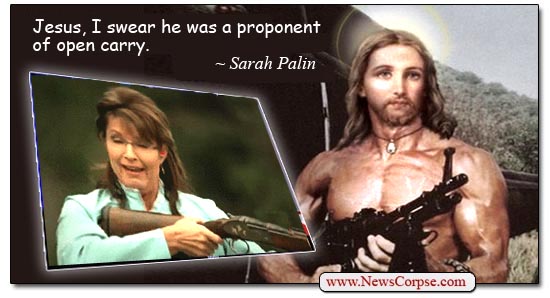 One of the inspirational verses in the book is Luke 22:36, which says “But now, he that hath a purse, let him take it, and likewise his scrip: and he that hath no sword, let him sell his garment, and buy one.” And from that Palin has constructed an interpretation that strains the bounds of reason. She spoke with Tom Sullivan of Fox News Radio and delivered her warped analysis of the scripture:

“In the New Testament, Luke:22. We’re talking about gun control. Jesus, I swear he was a proponent of open carry. Because he told his disciples, he said ‘You better arm yourselves. You better protect the innocent. You don’t rely on the authorities. You don’t rely on others peoples.’ He said ‘You carry your sword.’ He told his disciples ‘Before we go on our journey, if you have a cloak, if you have your purse, OK, go get ’em. But if you don’t have a sword with you…’ – which was their arms back then – ‘…then you sell your cloak and you go buy a sword. And you get out there and you defend the innocent and yourself. Let’s go.’ He was all for self-defense and the Second Amendment.”

Really? Then why on the next morning did he tell his disciples to cease any defense of him, saying that “all they that take the sword shall perish with the sword.” Biblical scholars read this verse as Jesus merely advising the disciples to be prepared with necessary tools for the tasks of survival (i.e. hunting, and cutting cloth or building materials). That explains why after he told them to buy swords he replied that “It’s enough,” when they responded saying that they had two already. Certainly two swords would not have been enough to fight the officers who would come to arrest Jesus. But they would be plenty as parts of a tool collection.

What’s more, nowhere in the verse does it say that Jesus advocated using swords, or any weaponry, to “defend the innocent and yourself.” To the contrary, he preached against violence and favored passive resistance as in “turn the other cheek.” Palin’s interpretation sounds like Jesus was assembling an early incarnation of The Avengers to suit up and take on the evildoers of Jerusalem.

In an oddly significant juxtaposition to Palin’s mangling of the Bible, Fox News reported yesterday that terrorists have had nearly unfettered access to guns in America. Gretchen Carlson’s story quoted a study by the Government Accountability Office on the ability of people on the Terrorist Watch List to legally purchase guns:

“People on the Terrorist Watch List here in the U.S. – Who knew they were still legally able to buy guns? Look at this data from the Government Accountability Office going back to 2004. Suspected terrorists made more than 2,200 attempts to buy guns from U.S. dealers. More than 2,000 of them, or 91% were successful.”

Who knew? Well, actually many people knew. Even Fox News knew and reported on it many times. This has been an issue for gun safety advocates for years. There have been several attempts, going back to at least 2007, during the Bush administration, to pass legislation to close what has been called “The Terror Gap,” but they have always been met with fierce opposition from the NRA and Republicans in Congress.

One of those Republicans who has opposed the legislation is Texas representative Tony Dale. Ironically, Dale is now citing the ease with which guns are available as a reason to deny entry into the U.S., and Texas, by Syrian refugees. Dale is worried that among them will be terrorists who will be able to purchase guns thanks to the legislation that he voted for. And another opponent of closing the Terror Gap was the late Adam Gadahn (aka Azzam the American), an Al Qaeda operative who issued a directive to his comrades saying that…

“America is absolutely awash with easily obtainable firearms. You can go down to a gun show at the local convention center and come away with a fully automatic assault rifle, without a background check, and most likely, without having to show an identification card. So what are you waiting for?”

It’s rather strange that Carlson would be so surprised that this is occurring when it is something that has received so much attention in the past. And her editorial take on the subject seems to be aligned with the gun safety advocates who are pushing for restrictions on gun purchases by those on the watch list. That would put her at odds with the rest of the Fox News team, the GOP, the NRA, and Sarah Palin. Which means, of course, that she is at odds with Jesus the Avenger. Uh oh.