If the Republican Party is ever going to wake up and shut down this misanthropic racist it had better be now. Donald Trump’s latest hateful howling has crossed a line of indecency that is impossible to ignore. And Godwin be damned, he is articulating Nazi rhetoric on a scale not seen since the originals. 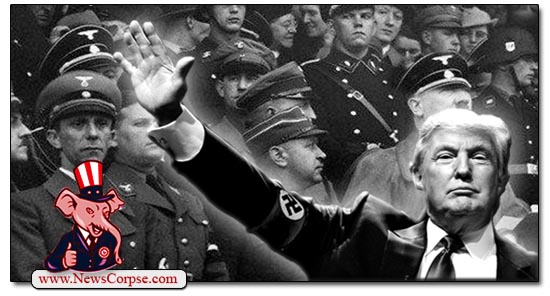 Just yesterday Trump told Yahoo News that he would support the development of databases and other systems to track and monitor people in the United States on the basis of their religion. He did not rule out forcing Muslims to have identifying papers or badges. Perhaps he would make them wear a star and crescent in the manner that Hitler’s Nazis made Jews wear the Star of David. From Yahoo…

Yahoo News asked Trump whether this level of tracking might require registering Muslims in a database or giving them a form of special identification that noted their religion. He wouldn’t rule it out.

This grotesque policy position fits nicely with his prior statement that he believes it may be necessary to close mosques in America. He said that “there’s absolutely no choice” because “some really bad things are happening.” Apparently one of the “really bad things” isn’t the assault on our Constitution’s First Amendment guaranteeing freedom of religion. But that’s not all, Trump also told Yahoo News that…

So “security is going to rule.” And I’ll bet the trains will run on time. And speaking of trains, this is the same man who wants to round up 11,000,000 Latinos for mass deportation. How he proposes to do that is a mystery, but it wouldn’t be surprising if it involved boxcars and concentration camps. He approvingly cited the 1950’s “Operation Wetback“ as a model for his plan. That operation resulted in dozens of deaths and was abandoned as a failure that violated humane standards.

In the short history of Trump’s campaign he has gotten away with saying repulsive things and demonstrating overtly bigoted behavior. Even when he disparaged solidly conservative principles like the military sacrifices of John McCain, or making a mockery of the practice of Christianity, his supporters remained faithful. And despite all of that, he still clings to the top of the polls in the Republican presidential primary. There has been an astonishing and troubling loyalty by Republicans who seem unfazed no matter how disgusting or ignorant he gets. And it isn’t just his supporters. Other GOP voters, pundits, and candidates, are reluctant to take him on.

If that continues it will be impossible for the GOP to separate themselves from his repugnant views. And the same goes for Fox News, who flagrantly promote Trump’s campaign. They are already tied to him on most other issues with which they agree completely. But if they don’t want to forever be associated with the outright appeal to the policies of the Nazis, they need to renounce him and cease supporting him. If his polling isn’t hurt by this we’ll know for sure that a significant chunk of the Republican Party is cool with fascism.