It is time for Glenn Beck to give up his phony pretense of patriotism. What he regards as love of country is really more like a Patriopathic™ disease that infects his brain with a cult-like zeal for ultra-nationalism. Beck does not love America, in fact, he bitterly hates much of it – perhaps the majority of it. And this is not some lefty hyperbole, it is his own words and opinions that reveal his disdain for this country. In the wake of the election results last night, Beck had this to say:

I’m thinking about taking a shovel and digging Nevada out. I mean, seriously. We’ll dig all the way to China if we have to and there’s just a giant, Nevada-sized hole in the earth.

You know, California, I swear to you I’m gonna take the star off the flag. There’s gonna be 49. […] Can we kick a state out? 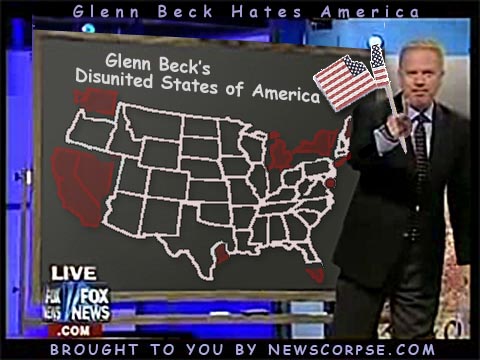 Beck should have his own wing in the Hypocrisy Hall of Fame. He pontificates feverishly about the people having their voices heard – unless they aren’t saying what he wants to hear. When Nevadans and Californians speak their minds they are not accorded the respect of citizens making a democratic choice. They are reviled as unworthy of their citizenship.

We’re talking about tens of millions of families, soccer moms, small business owners, and veterans who have sacrificed more for this country than Beck ever will if he outlives Methuselah. And their crime is nothing more than voting for a party other than the one Beck prefers. I’m not sure Beck knows what a democratic republic is.

This isn’t a new mode of attack for Beck. He frequently lambastes domestic targets whom he perceives as enemies. He would like to eliminate New York, Chicago, Vermont, New Orleans, Madison, and Seattle. He’s also not particularly fond of Austin, Hawaii, and parts of southern Florida.

Beck’s geographical bigotry extends beyond a mere disagreement with the values of a particular region. He actually regards them as so irredeemably un-American that they ought to be disjoined or destroyed. That’s the penalty for holding or expressing views that are contrary to Beck’s. Apparently the remaining portion of Beck’s Disunited States will not enjoy free speech.

The funny thing is that if Beck got his way, and the objects of his hatred were to actually separate from the union, the U.S. as he imagines it would be substantially weaker and poorer. The banished territories, on the other hand, would be exceedingly prosperous – even more so without having to support the sparsely populated rural states that lack the productive industries that generate revenue and trade.

How long will Beck get away with maligning his fellow Americans? How long will his phony patriotism fool people? I wonder when even his fans, who live in the dark corners of Beck’s anti-America, will become disgusted with his insulting and divisive rhetoric. Then again, I wonder if they even know they are being insulted.

9 thoughts on “Glenn Beck Hates America And Her People”