In the concluding episode of Glenn Beck’s hallucinatory documentary on George Soros, Beck apparently had completely run out of fresh smears so he spent most of his time telling his viewers not to listen to him…

“Go and find the truth yourself. Do not take my word for any of it.”

…and not to kill him…

“In the end, you go against that kind of power you will be destroyed. I get it.”

And in an uncharacteristically honest declaration, not to believe him…

“In these last three episodes I’m not making claims, I’m not asking questions, I’m not telling you statements of fact.”

That’s painfully obvious, but it’s still nice of him to admit it. As an example of a statement that doesn’t contain facts, Beck played a video wherein Soros was asked about whether there should be “more foreign influence into the United States.” Beck’s analysis of the answer was that Soros was advocating a vote for foreigners in Congress. Where Beck strayed from the facts was when he played the answer but cut off the video before Soros had finished it. Here is the part of the answer that Beck played:

“I think you put your finger on a very important flaw in the current world order, and that is that only Americans have a vote in Congress. And yet, it is the United States that basically determines policy for the world. That is a flaw in the current setup.”

And here is the part he cut out:

“I don’t think you can correct it by giving the Chinese government a vote in Congress. But it is a flaw, and I think this is where American leadership is needed, to take into account and respect the interests of others as well, in order to retain the dominant position we currently enjoy.”

Notice that the part that was excised actually reveals that Soros was saying precisely the opposite of what Beck insinuated that he was saying. And yet, Beck can still claim that he was just playing back Soros’ own words. Just like I’m only playing back Beck’s own words in this video that shows him declaring his admiration for Hitler:

Beck’s final thoughts contained a lot of frightening advice to prepare for something horrible that’s coming. This, of course, is something he’s been doing for months. He warned that you should have a year’s supply of food stored up. He made a vague but ominous prediction that “next year we’re not gonna just change our self, we’re gonna change the world.” And he topped it all off with another errant slice of honesty:

“More and more propaganda is coming in the days and weeks ahead.”

Thanks for the warning, Glenn. But it’s pretty much what we were expecting from you anyway.

In response to a barrage of criticism from Jewish groups appalled at Beck’s latest excursions into anti-Semitism, Joel Cheatwood, a senior vice president at Fox News, took the time to issue a statement of support for Beck’s hate speech:

“[I]information regarding Mr. Soros’s experiences growing up were taken directly from his writings and from interviews given by him to the media, and no negative opinion was offered as to his actions as a child.”

Indeed, the information was taken from Soros’ own writing in much the same way as demonstrated above – edited, out-of-context, and deliberately misrepresented. And if Cheatwood thinks the opinions offered were not negative, I’d hate to see what he does think is negative. Personally, I would not regard a blatantly false assertion that a 14 year old boy participated in throwing his fellow Jews into gas chambers to be a particularly positive opinion. But that’s just me.

Now, stay tuned for Beck’s next shocking expose. The follow up to “The Puppet Master”, coming soon, will be “The Muppet Pastor.” 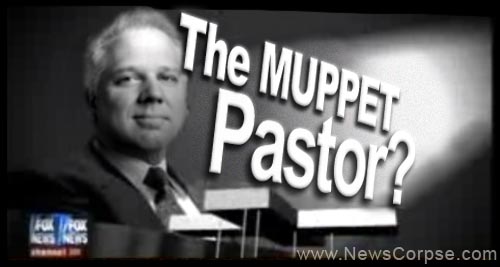 It will feature Beck using funny voices he heard on Sesame Street to preach his antediluvian gospel. You’ll delight to watching Beck play with dolls, eat cookies, and draw on chalkboards. All these and more of the classic antics that prove Beck’s contention that he will always treat his viewers like adults.