While some people may think this is a good idea, it would present a variety of unanticipated problems (like being able to form a quorum). But rest assured, this is not a joke: 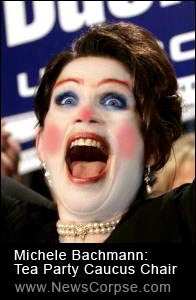 SAO PAULO — Grumpy the clown won election in a laugher, getting more votes than any other candidate for Brazil’s Congress. Now he has to prove that he can read and write.

The Sao Paulo Electoral Court held a closed-door exam for the clown turned congressman-elect on Thursday to determine if he meets a constitutional mandate that federal lawmakers be literate.

I shudder to think what would happen to the Republican Party’s freshman class if there were such a mandate here. Of course, because of our Constitution, we will never see a headline proclaiming that the “U.S. Tests Literacy Of Clowns Elected To Congress.” No sir. When we elect clowns to Congress they take their posts no matter how ignorant or unqualified they may be. In fact, they form their own caucuses (see Tea Party Caucus).

6 thoughts on “Literacy Testing For Clowns Elected To Congress”