The cable “news” network most closely associated with the white supremacism of Donald Trump and the alt-right is living up to its heinous reputation. On Friday the Fox News program “The Five” broadcast a segment attacking one of America’s most honored civil rights organizations. The Southern Poverty Law Center (SPLC) has been providing legal services to victims of prejudice for decades. So obviously Fox News had to invent some BS to charge them with. 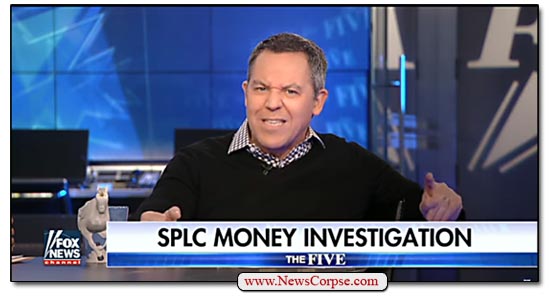 The program’s cast mined the dregs of the ultra-rightist Washington Free Beacon for their material. And they sought the support of the Family Research Council, a notorious hate group, for confirmation. The SPLC responded with a demand for a correction and a detailed itemization of what Fox News got wrong.

The Fox News segment began with a diatribe by co-host Greg Gutfeld. He rattled off some falsehoods that portrayed the SPLC as charlatans and associates of violent nutjobs. His rant began with the charge that the SPLC was “a hard left outfit that loves to label people as extremists.” Then he dived deeper into the barrel of outright lies (video below):

“This poverty center has loads of [money]. A $320 million endowment and chucks almost 20% of it into offshore equities. Cayman Island stuff. I don’t understand it. So this poverty group sits on a pile of offshore dough. That’s like a personal trainer with a gut. Or a priest with a harem.

“The Center paid out $20 million in salaries in 2015 but provided just 61 grand in legal assistance. So the Southern Poverty Law Center appears to have no poverty and do virtually no law. It’s the most misleading name since the Democratic Party.”

The SPLC’s letter to Fox News addressed Gutfeld’s allegations and plainly showed them to false. All of the information was publicly available and posted on the group’s website. For instance, with regard to the charge that they spent only $61,000 on legal assistance, the Center replied that:

The letter goes on to point out that they spent more than $15 million on initiatives on behalf of their clients. That’s a far cry from the $61,000 Gutfeld dishonestly reported. The whole segment was a smear job filled with easily disproved assertions. Clearly Fox News didn’t do even the most cursory research before broadcast. Consequently, the SPLC is demanding that Fox “acknowledge on the air its errors in the story.” But don’t hold your breath waiting for that to happen.