The culture of misogyny has tarnished Fox News in recent years with a string of heinous exposures of sexual misconduct. Many of their top executives and stars have been fired, suspended, or otherwise separated from the network after accusations by dozens of female victims. 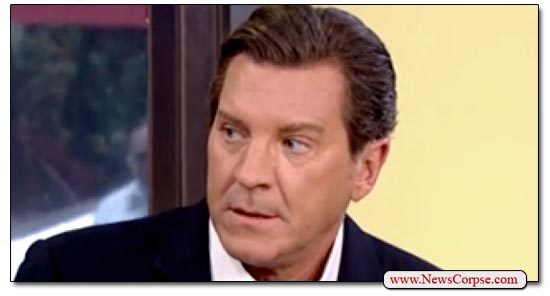 Eric Bolling was the host of the new afternoon program “The Specialists.” He also anchored a weekend business themed show called Cashin In. But a few weeks ago he was accused of sending inappropriate texts, including male genitalia, to women colleagues. He was temporarily suspended pending an investigation. But now Yashir Ali of the Huffington Post reports the latest development:

“News of the departure comes after two HuffPost reports revealed a pattern of inappropriate behavior by Bolling, who co-hosts “Fox News Specialists.” Fox News will cancel the program, it said in a statement.”

A Fox News statement characterized the separation as an agreement “to part ways amicably.” Then they wished him “the best of luck.” That hardly seems like a suitable tone for an employee being jettisoned for sexual improprieties. Except,of course, for Fox News where such behavior seems to have been a prerequisite for employment. And Bolling has not exhibited any remorse. In fact, he’s pursuing a $50 million lawsuit against the HuffPost reporter who wrote the original story.

Bolling’s departure caps a long list of prominent Fox News perverts who have left the hive. It began with the former CEO, Roger Ailes. Then Fox’s biggest star, Bill O’Reilly, finally succumbed to years of rumored sexual harassment. The president of Fox News, Bill Shine, was also dismissed under a cloud. As were Fox Business host Charles Payne, Fox Sports President Jamie Horowitz, and the Vice-President of Fox News Latino, Francisco Cortes. That many high-level abusers is not a coincidence, it’s a guideline.

In addition to the loss of those sleazeballs, Fox News also said farewell to some of the female talent who resigned after being victimized. They include Gretchen Carlson, Megyn Kelly, Laurie Dhue, Andrea Tantaros, Rudi Bakhtiar, and Julie Roginsky. That has exacerbated Fox’s struggle to maintain its status as the top cable news network. In recent months it has been losing to both MSNBC and CNN in the critical advertising demographic of 25-54 year olds. That’s partly due to the unpopularity of its primary benefactor, Donald Trump. American news consumers are switching to networks where they can get more honest accounts of Trump’s corruption and incompetence. And perhaps they aren’t so thrilled with a network that is teeming with degenerate dirtbags either.