On Wednesday Donald Trump signed an executive order that significantly damages the Affordable Care Act (aka ObamaCare). It’s purpose is to force people into the old “junk” plans that failed to provide necessary coverage. What’s more, it will remove the protections for people with preexisting conditions. And he wasn’t finished with his mission to deliberately destroy ObamaCare. 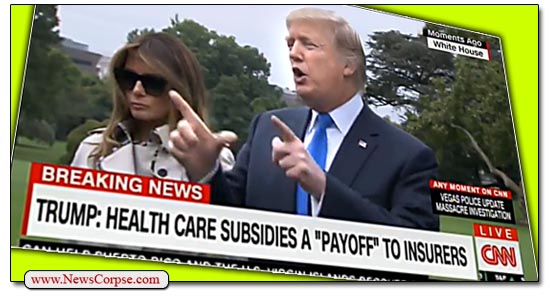 Later the same day the White House released a statement advancing their assault on affordable healthcare. They announced that the administration would stop paying the cost-sharing reduction [CSR] payments that subsidize many individual policies These subsidies mainly go to lower and middle income families who otherwise would be unable to purchase insurance.

It’s a monstrously cruel decision on Trump’s part that defies reason. Except that Trump took a few questions from reporters Thursday morning wherein he helpfully offered the reason himself (video below):

And there you have it. Trump is taking out his vengeance on an industry that he thinks hasn’t been generous enough to him. Like almost every other decision he makes, it’s all about Trump or go suck an egg. Like his attacks on media that is critical of him, including recent threats to revoke their licenses. That, by the way, ha cannot do because the federal government doesn’t license TV networks or journalists. But never mind the facts, Trump is openly admitting that his healthcare policy is driven by partisan politics and donations.

To make matters worse, the foundation for Trump’s revenge fetish is utterly false. In this morning’s rant he repeatedly complained about insurance companies making too much money. Let’s set aside the inappropriateness of a president castigating an American industry for being successful. Trump is wrong on the facts. The insurance sector’s equity growth over the past three years (14%) has only slightly exceeded that of the S&P 500’s financials index (12.5%). What’s more, his contention that the industry doesn’t support him could not be more off base. A look at the campaign contributions from big insurers shows that Republicans received far more than Democrats. Consequently, since his anger at insurers is so badly misdirected, his actions are just plain nasty and hurtful. And the victims are wholly undeserving of his wrath. That, of course, includes the people whose coverage will now be out reach. According to analysts at CNBC:

Trump promised that he would provide more and better healthcare at lower cost. But his imperial executive actions yesterday ensure that millions will lose their health insurance, those who don’t will pay more, and the nation’s deficit will increase. And by taking this action unilaterally, without any input from the people’s representatives in Congress, Trump is essentially invoking the repeal of ObamaCare without any effort to replace it. It’s a disaster in the making that will be fully owned by Trump and the Republican Party, if they go along with it.

UPDATE: Now Trump is bragging that he hurt an industry that employs hundreds of thousands of Americans. And his reason for hurting it, as stated above, was because he thinks it didn’t support him. That, by the way, is illegal and another to reason to impeach his fat ass.

Health Insurance stocks, which have gone through the roof during the ObamaCare years, plunged yesterday after I ended their Dems windfall!

5 thoughts on “In his own words: Trump reveals the real, spiteful reason he is sabotaging ObamaCare”