Leave it to Fox News to politicize anything, no matter how repulsive. The salaciousness of the Harvey Weinstein scandal must have been too much for them to pass up. So for the past several days they have been desperately trying to tar any and all Democrats with Weinstein’s disgusting behavior. It’s a tactic commonly used by the political bottom-feeders on the right, and especially by Fox News. 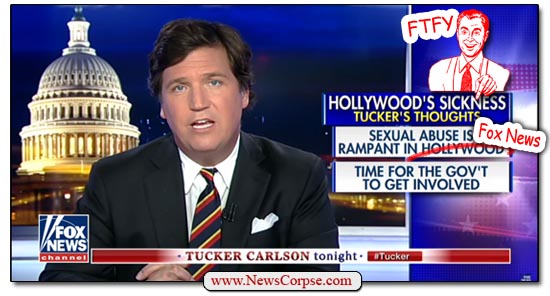 On Wednesday night Tucker Carlson, arguably the most annoying man on television, delivered one of his typically sour monologues. In his opening segment he spun furiously in an effort to intertwine Democrats with a story whose focus ought to have been on the victims. But at Fox News it is always more important to cravenly exploit political biases. Carlson made sure to single out Hillary Clinton in his remarks because what’s more relevant than someone who holds no government office, or likely ever will? “Weinstein couldn’t have gotten away with any of this,” Carlson smeared, “without enablers like Hillary Clinton.” And then he unleashed this cognitive mess:

“Sexual abuse is epidemic in Hollywood. The people in charge have covered it up and made excuses for it. In each case protecting the powerful from the powerless and the abused. It is time for the federal government to get involved. The Department of Justice should launch an immediate investigation into Hollywood’s culture of systematic sexual abuse.”

First of all, sexual abuse is epidemic in America. It isn’t unique to Hollywood, and that assertion minimizes the scale of the problem. Which may be deliberate on Carlson’s part. More to the point, Carlson’s statement would actually be more appropriate if applied to Fox News. The list of their high-level perverts began with former CEO, Roger Ailes. Then Fox’s biggest star, Bill O’Reilly, finally succumbed to years of rumored sexual harassment. The president of Fox News, Bill Shine, was also dismissed under a cloud. As were Fox Sports President Jamie Horowitz, Fox News Latino VP, Francisco Cortes, and most recently, host Eric Bolling.

As Carlson noted, “The people in charge have covered it up and made excuses for it. In each case protecting the powerful from the powerless and the abused.” It wasn’t until their victims started coming out publicly that the network acknowledged the cesspool they were wallowing in. So if the Justice Department should launch an investigation, they might want to start with Fox.

Oh wait, they already did. A probe of the personnel and finances of Fox News was initiated in the final days of the Obama administration. The U.S. Attorney for the Southern District of New York, Preet Bharara, was in charge. That is, until Trump fired him.

On Wednesday the Daily Mail reported that Trump’s Attorney General, Jeff Sessions, has instructed the FBI to open a probe into the Weinstein affair. However, the Daily Mail is an ultra-conservative British tabloid, which makes this story somewhat suspicious. To date it has only been shared on other right-wing websites like Breitbart, Redstate, and Newsmax. But it’s premise is not implausible. Trump is known for taking positions based on something he just saw on Fox News. So if he watched Carlson make this proposal, he might well have directed Sessions to have the FBI initiate an investigation. And a good bootlicker like Sessions would surely have obeyed.

In his segment, Carlson complained that it took Hillary Clinton five days to denounce Weinstein. Donald Trump still hasn’t done so. The only comment he made was “I’m not surprised.” So apparently Trump has known that Weinstein is a sexual predator, but he never bothered to mention it. As for Carlson, his hypocrisy is off the charts. He works for a network that harbored some of the most despicable miscreants imaginable.

There is no evidence that Fox News has cleaned up its act. Carlson owes his program to the departure of Megyn Kelly, who left in part due to sexual harassment from Bill O’Reilly. And now Carlson’s show actually airs in O’Reilly’s old time slot. Meanwhile Sean Hannity has brought O’Reilly back into the Fox fold as his guest, without ever mentioning the reasons he was fired. So if Carlson had any integrity, he might want to reexamine who the real enablers are.