On Wednesday Fox News published an article about the United States Olympic team that took a surprisingly negative tone. And the author was no back-bencher on Fox’s roster. It was John Moody, the Executive Vice President and Executive Editor for Fox News. Apparently he was upset by reports that the U.S. athletes represented a broader scope of diversity than in the past. 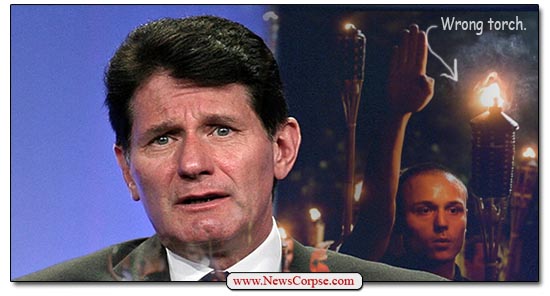 Moody’s column was a thinly veiled defense of bigotry and unapologetically titled, “In Olympics, let’s focus on the winner of the race — not the race of the winner. The message he was putting forth was that because of the diversity, there must have been some unsavory manipulation to favor athletes who were not straight and white. That allegation, of course, was never supported by any facts in the article. It was simply Moody’s suspicion based on remarks by an Olympic Committee official praising this year’s team. The article began with an uninhibited display of prejudice:

“Unless it’s changed overnight, the motto of the Olympics, since 1894, has been ‘Faster, Higher, Stronger.’ It appears the U.S. Olympic Committee would like to change that to ‘Darker, Gayer, Different.’ If your goal is to win medals, that won’t work.

“A USOC official was quoted this week expressing pride (what else?) about taking the most diverse U.S. squad ever to the Winter Olympics. That was followed by a, frankly, embarrassing laundry list of how many African-Americans, Asians and openly gay athletes are on this year’s U.S. team. No sport that we are aware of awards points – or medals – for skin color or sexual orientation.”

Not only was Moody flaunting his noxious hatefulness with the disparaging reference to being “Darker, Gayer, [and] Different,” he whined about the USOC official being proud of America’s team. And nowhere in the official’s comments did he suggest that anything but skill and talent would result in the award of medals. The entirety of Moody’s complaint was wrapped up in his personal biases.

After the article was published, it drew an onslaught of well-deserved criticism from the public and many of the organizations that represent the groups that Moody was insulting. So yesterday Fox News deleted the article. They left no explanation or apology in its place. It was simply gone. Well, except for the fact that nothing is ever really “gone” on the Internet, and the article can still be found here thanks to the Web Archive. And Fox News was later forced to comment when the Hollywood Reporter contacted them to find out what happened. A Fox News spokesperson said that “John Moody’s column does not reflect the views or values of FOX News and has been removed.”

Really? The opinions of the Executive Vice President and Executive Editor for Fox News don’t reflect the views and values of the network? If Moody doesn’t reflect those values, than who does? He is literally the person who decides which views are aired on Fox News, and which aren’t. He tells his producers and hosts what to cover each day and how to frame the coverage. And if there is one thing that is unmistakable, it’s that his views in this matter are identical to everything you see on Fox News regarding American diversity. Just watch a few minutes of Tucker Carlson, or Sean Hannity, or Laura Ingraham, or Fox and Friends (if you can stomach it).

For some background on Moody, last year he penned a column praising French presidential candidate, and leader of France’s neo-Nazis, Marine Le Pen. Moody even favorably associated Le Pen with Donald Trump. He called her “France’s Trump” and “the candidate closest to Trump in ideology.” And make no mistake, he considered that a compliment to both. So it’s impossible to separate him from the disgusting hate speech that he disgorged in his latest column. Even if Fox News deletes it. Moody is unalterably the personification of the network’s views and values, no matter how badly they might want to distance themselves from this.