John Moody, Executive Vice President and Executive Editor for Fox News, is boldly defending France’s Marine Le Pen. She’s a French candidate for president who represents a political party that has openly identified with Germany’s Nazis. What’s more, Moody is favorably associating Le Pen with Donald Trump. He calls her “France’s Trump” and “the candidate closest to Trump in ideology.” It’s unclear why he regards this as positive linkage. But he not only applauds their similarities, he laments their common “mistreatment” by the press when they do or say offensive things. 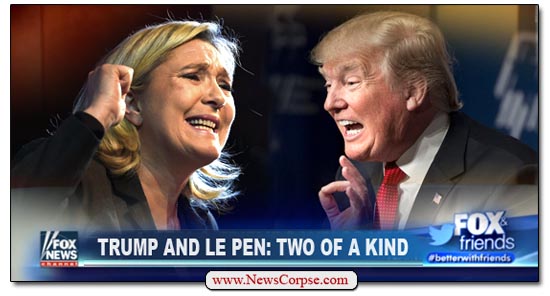 For example, Le Pen was recently taken to task for her painfully insensitive comments about France’s behavior during World War II. The nation was under German occupation, but its government, and many of its citizens, collaborated with their occupiers. Moody described it this way:

“Marine Le Pen, the presidential candidate of the National Front, touched an old but still open wound among Frenchmen this week, when she said her countrymen should stop feeling guilty about rounding up French Jews who were sent to their deaths during World War II, when France was under Nazi occupation.”

Well, that’s thoughtful of her. Le Pen doesn’t want the long suffering people of France to feel guilty. After all, it was their grandparents who shamefully capitulated to the Nazis and handed over innocent Jews to their murderers. And that was a long time ago, so let’s just forget about it already.

What both Le Pen and Moody are missing is that no one is asking the French to feel guilty. However, they are expected to take responsibility for the atrocities committed at the time and to never forget what happened. That’s the only sure way to keep it from happening again. It has long been a goal of neo-Nazi groups to persuade people that the crimes of the past were either fake or not serious enough to memorialize. And that also appears to be the goal of Le Pen and Fox News.

Moody makes that very point later in his commentary. He starts by acknowledging that Le Pen’s “National Front” began with her father’s overtly anti-Semitic agenda of Holocaust denial, Moody buys into the lie that it’s not the same party today. He says that:

“The National Front’s founder, Jean-Marie Le Pen – Marine’s father – was an anti-Semite and a Holocaust denier. But since Marine took over leadership of the party, she has successfully softened its image, while still calling for stronger borders, fewer immigrants and a hard look at France’s participation in the European Union.”

See? Everything’s fine now. The rough edges of Nazism have been smoothed over by the daughter of the party’s bigoted founder. And even though the party’s agenda is unchanged, all should be forgiven and forgotten. Moody argues that a new generation of French patriots have a completely different point of view. Well, actually he argues that they have an ignorant point of view:

“But what they, and the French political establishment are forgetting is this. Not many Frenchmen living right now were born during World War II. And the youngest French voters – in their late teens and 20s – have no connection to the Holocaust except what they have read or been told.”

And there you have it. Since the young folks in France don’t know anything about World War II, none of it matters anymore. Why hold them accountable for maintaining a future of tolerance and peace when they don’t even know about their nation’s genocidal past? We certainly wouldn’t want to educate them. That might be make them sad. Or worse, produce a sense of commitment to avoiding the same mistakes of their forefathers.

Moody closed by continuing to trivialize the past and Le Pen’s characterization of it. He called Le Pen’s repulsive remarks about the Holocaust “inelegant,” and complained that they “stirred up the usual outrage.” And you wouldn’t want anyone outraged by a candidate soft-pedaling genocide. Then Moody sought to put the past in its place as merely historical details that have little significance to modern folks.

As Executive Vice President and Executive Editor for Fox News, Moody’s opinion can be said to represent the network. It is surely aligned with that of most of its right-wing hosts and commentators. And if there is one thing he got right it’s that Le Pen and Trump are ideological partners. Le Pen gushed at Trump’s election saying that it gave her “reason to rejoice.” We’ll see. The first round of the French presidential election is April 23.