Donald Trump’s press secretary, Sarah Huckabee Sanders, has been called a lot of things. Most notable (and on target) is a lying propagandist for a criminal chief executive. But she has never been criticized for being a wallflower who can’t defend herself under fire. Especially when the fire is coming from the Washington press corps who she encounters on a near daily basis. 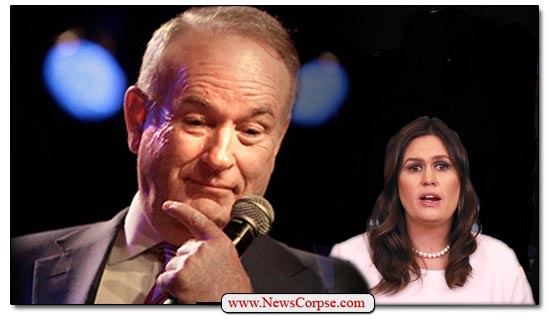 Enter Bill O’Reilly: The disgraced has-been who struggles to get attention for his lame blog now that he has been banished from his Fox News perch. O’Reilly has become a pathetic wretch who thinks he can still corral an audience after the disclosures of numerous payoffs to women accusing him of sexual harassment and abuse. At least New York’s Attorney General had the decency to resign.

The Hollywood Reporter caught up with O’Reilly at a party for Richard Grenell, Trump’s new ambassador to Germany (and a former Fox News contributor). They witnessed a discussion that O’Reilly had with Sanders that tells you something about both of them. According the Reporter O’Reilly said that he “feels for” Sanders, who he said is “not able to fight back when attacked by beat reporters, unlike her boss, President Donald Trump.” O’Reilly posted their exchange on his website:

“I said, ‘Ms. Sanders, with all due respect, if you ever need me to stand next to you in those press briefings, I will volunteer to do that. And, if somebody gets out of line, I will tell them exactly what I think of their behavior,’ “

Horrors! O’Reilly’s threatening to tell some unsuspecting reporters what he thinks of them (like they care). And where in that self-serving slobber was any hint of “due respect” for Sanders? O’Reilly is implying that lady-folk Sanders can’t do her job. And although she sees her job as lying to the American people everyday, she’s doing that pretty well. She obviously doesn’t need the “loofah man” to rescue the poor defenseless female from the mob of ravaging journalists. Let’s face it, the only thing O’Reilly wants to do is get some airtime on real TV, as opposed to the little-watched videos he makes in his Long Island basement. He went on to babble:

“I told her that she is doing a great job, in the sense that it’s not a partisan play. She’s representing her country in very difficult circumstances, extremely difficult, and she’s a patriot — you know, she’s taken enormous amount of abuse, enormous.”

In O’Reilly’s cartoon brain what Sanders does isn’t partisan? That’s a symptom of acute grey matter rot. And he attempts to portray the press secretary as being on a par with the military. Come on, what’s so difficult about answering questions from reporters? And if anything makes this more difficult than usual, it’s the dishonesty and ignorance of the president she works for.

The Reporter’s article says that Sanders laughed when O’Reilly made this suggestion. That’s a fairly appropriate response. But it doesn’t go nearly far enough to shame O’Reilly for belittling the woman whose job it is to speak for the President. O’Reilly’s misogyny is evident in his presumption that he would be necessary or helpful as a protector for Sanders. If anything, he would probably seek to take advantage of her to advance his own interests. Because that’s what narcissistic misogynists like O’Reilly (and his pal Donald Trump) do.