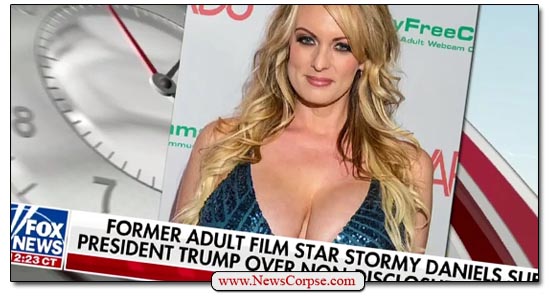 Many legal experts have said that Trump has more to fear from this litigation than from the investigations into his collusion with Russia. That’s partly due to the fact that it is not a federal matter over which Trump could have some influence. He would also find it more difficult to evade having to give depositions and testimony. And now with his new lawyer, Rudy Giuliani, gallivanting across America’s TV screens and making everything worse with his ignorant ravings, Trump is in a decidedly more precarious position than he was in when this began.

There is, however, one group of the populace that is probably not especially concerned about the Stormy affair. Fox News viewers simply don’t care about any unethical or criminal thing that Trump does. They will forgive him for whatever the “deep state,” “hate-Trump” media cooks up. But there’s another reason they won’t be troubled by Trump’s abhorrent behavior. They don’t really know much, if anything, about it.

Vox Media did an analysis of the coverage of Stormy Daniels and discovered that Fox News provided the bare minimum of airtime to the story. That’s surprising considering that Fox ordinarily would be all over a sex scandal involving a politician. Well, if the politician were a Democrat. But in this case their avoidance of the story is nothing less than deliberate suppression. It is why Fox News is so often characterized as State-Run TV. What Vox found was that Fox News covered stories mentioning Stormy, Cohen, or Giuliani a fraction of the amount as their peers in cable news. The charts reveal the extent to which Fox sought to smother this story.

In addition to the self-censorship employed by Fox, it is also notable that on those rare occasions when they did report on these topics, the spin was always in Trump’s favor. They would portray Stormy as a disreputable figure who can’t be trusted. And, conversely, Trump was always an innocent victim who did nothing wrong and was being subjected to a smear campaign. Never mind that both Trump and Giuliani were the people most responsible for disclosures that point to Trump’s guilt.

At the end of the day, the glassy-eyed disciple of Fox News remain blissfully ignorant of the facts surrounding these events. And to the degree that they are aware of some of the facts, they believe that they were manipulated by the evil media cabal that controls the planet. Trump, they are convinced, has been miscast by his enemies as a lying pervert who scoffs at the law. The only problem with that is that he is a lying pervert who scoffs at the law, and his tunnel-blind followers refuse to see it. And with the help of Fox News, they will continue to see only very little of the truth that is so offensive to them.