Ken Vogel at Politico has published a story that examines what he portrays as a new effort by Republicans and the right to dig up dirt on Democrats. The article raises an important question, but not the one Vogel may think. The question is: What rock has Vogel been residing under?

While the article correctly notes the recent arrival of Karl Rove’s Crossroads GPS to the Dem Bashing party, the notion that the right has not been sufficiently aggressive with their opposition research is absurd to the point of delusion. In past election cycles we’ve seen Barack Obama slimed with “oppo” aimed at his association with Jeremiah Wright and Bill Ayres. We’ve seen John Kerry’s military service demeaned by the Swiftboat Liars. Established media hacks like Bill Kristal, George Will, and Rush Limbaugh have been hammering the left for decades. And Fox News was built from the ground up for that purpose. What’s new about any of this?

The article quickly descends from delusion to comedy when Vogel quotes Matthew Vadum, a conservative activist who puts forth his view that the right is just too darned principled to immerse themselves in the dirty side of politics:

“A lot of conservatives think that you have to abide by Marquess of Queensberry rules even if you’re in a knock-down, drag-out bar fight,” said Matthew Vadum, a senior editor at Capital Research Center, a conservative non-profit that researches liberal donors. “And it’s good to be ethical, but sometimes maybe you need to explore new frontiers to reflect the changing nature of political combat in modern America.”

I would love to see a list of the conservatives who abide by any rules of civility and eschew negativity or hardball tactics. Vadum says there are a lot of them, but I can’t think of a single one.

Vogel briefly mentions rightist propagandists like Andrew Breitbart, Tucker Carlson, and James O’Keefe, but despite the impact they’ve had on people (Van Jones) and policy (health care), Vogel shirks them off as afterthoughts. He asserts that the right has nothing to match Media Matters or the Center for American Progress. Someone should introduce him to the Media Research Center’s Newsbusters, the Heritage Foundation, and the American Enterprise Institute.

The right could justifiably be credited with inventing the most vile tactics of political combat in modern America. Yet Politico publishes this article that asks its readers to take seriously the contention that conservatives are floundering politically because their hearts are just too pure.

Right. And all Hannibal Lechter wanted was a tasty appetizer that went well with a supple Pinot Noir. 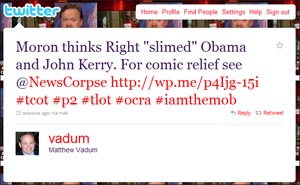 [Update:] Matthew Vadum takes umbrage at my comments and at the same time proves that right-wingers are a-holes by calling me a moron.

Also, he doesn’t bother to make any sort of substantive rebuttal to anything I said. I guess he thinks that lying about a veteran’s war record and saying that a presidential candidate is “palling around with terrorists” isn’t “sliming.”