Fox News’ ratings are beginning to reflect the general disenchantment that America is experiencing with the lunatic fringe as represented by Republicans and Tea Partyers (but I repeat myself). In the latest Nielsen reporting for April 2011, the most prominent Fox programs have precipitously declined: 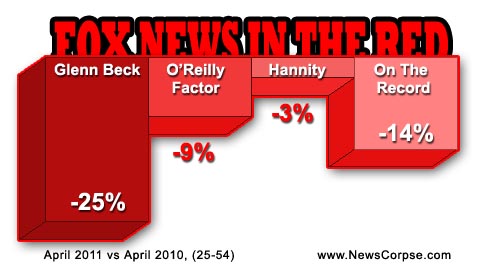 What is especially notable about this is that almost all of the competing cable news programs saw robust increases in viewers in the same time period – many up by double digits (including Rachel Maddow who beat Sean Hannity last Friday). The one exception is MSNBC’s The Last Word with Lawrence O’Donnell, but that is only because it is being compared to Keith Olbermann’s numbers for Countdown which was in O’Donnell’s time slot last year.

This is part of a continuing downtrend for Fox and the Right-Wing Carnival that includes Birthers, Climate Hoaxers, Unplanned Parenthoodies and, of course, Tea Baggers. The recent tax day rallies sponsored by the Tea-publicans struggled to attract a few dozen whiny protesters, while Democrats and union members showed up by the tens of thousands to protest rollbacks of long-held rights for workers. Town hall meetings are being crowded with progressive citizens intent on rescuing Medicare from regressive GOP legislation. The ultimate cinematic fantasy of rightist ego-centrism, Atlas Shrugged, is such an abysmal failure at the boxoffice that the producer has already come out publicly to state that he is reconsidering his plans to expand the release and make any sequels.

It appears that the audience for idiocy is drying up. And the primary platform for aggregating that audience, Fox News, is feeling it where it hurts – in the ratings. They have already ejected the king of the idiots, Glenn Beck, whose program has been losing viewers and advertisers for months. Now it’s time to return focus to the remaining disinformers on Fox like Bill O’Reilly, Sean Hannity, Megyn Kelly, and Neil Cavuto. These people were every bit as bad as Beck before Beck joined the network, and they should not get off the hook now.

By maintaining pressure on Fox News we can have a real impact on the media environment. Viewers must be made to feel embarrassed by any association with the network of lies. And other media organizations must cease to regard Fox as a legitimate journalistic enterprise.

This is the time to ramp up efforts to prod cable companies to make all news networks available on the basic tier so that there aren’t some that have unfair advantages over others. And while we’re at it, we should advise our cable providers that we will cancel our service rather than pay more to support Fox News. Fox is presently renegotiating some of their cable contracts and demanding much higher fees. We need to make the argument that they don’t deserve them, particularly if it impacts the bills of consumers who don’t want Fox to begin with.

There has never been a better time to advance this cause. Fox is weakening by the day, and we have the wind at our backs. Keep up the pressure. Keep educating your family and friends. Keep Tweeting and sharing on Facebook. Fox is wobbling and it will fall down if we push hard enough.

[Update:] A new Gallup poll confirms the evolving distaste for right-wingedness. The Tea Party unfavorable ratings are at their highest point ever.