There has already been a barrage of media analysis and discussion of Glenn Beck’s not-so-surprising separation from Fox News. For the most part that discussion has been focused on speculation as to the cause of the break up and on what will become of Beck. But any suggestion that Beck’s departure polishes Fox’s reputation is pure folly. The worst of Beck’s haunted imagination is securely woven into the Fox News dis-comforter. The trademark Fox invective, sophistry, and bias predate Beck and will outlive him. 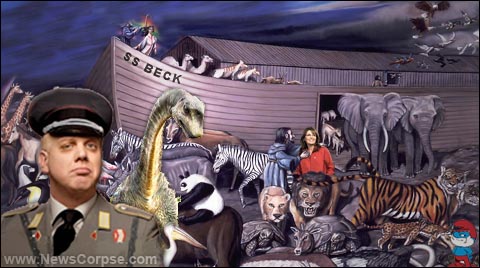 Many in the press, however, are more interested in prattling on about the alleged animosity for Beck amongst “serious” conservatives and his colleagues at Fox who think that his doomsday rhetoric and conspiracy theories give the “news” network a bad name. The purveyors of conventional wisdom are very concerned about Fox’s teetering credibility and are scrambling to defend it:

Howard Kurtz, CNN, The Daily Beast: …many senior Fox executives are relieved to be rid of Beck. [and] …some journalists and executives at the network privately expressed concern that Beck was becoming the face of the network.

Michael Harrison, editor of Talkers Magazine: You can’t be a rodeo clown and maintain credibility,

Matt Lewis, The Daily Caller: My take is that while Beck’s show was individually a ratings hit, he also risked tarnishing the overall Fox News “brand”.

Jeffrey McCall, professor of media studies, DePauw University: Beck was no longer just a personality with a show on FNC. He became an easy target for Fox News critics to characterize him as representative of the entire channel.

These august observers have frightfully short memories. The truth is that Fox earned its nefarious reputation long before Beck arrived and there is every indication that they will preserve it after he’s gone. In fact, it’s that reputation that made Beck such a good fit to begin with and lured him to the network despite his admitted reluctance when first approached. The pundits who are advancing the premise that by losing Beck, Fox can be redeemed are, to put it kindly, mistaken. Here is why Fox News without Glenn Beck will be just as bad as Fox News with Glenn Beck:

1) Bill O’Reilly: Before Beck called President Obama a racist, Bill O’Reilly ventured to Sylvia’s in Harlem and expressed his surprise that the mostly African-American patrons weren’t acting like primitives. And when the First Lady was criticized for expressing her pride that America had evolved to the point where they would elect an African-American president O’Reilly considerately declared that “I don’t want to go on a lynching party against Michelle Obama unless there’s evidence.” Nice choice of words.

2) Sean Hannity: While Beck may suffer from an acute case of Nazi-Tourettes Syndrome (Louis Black™), Sean Hannity is a personal friend of the notorious neo-Nazi schlock-jock, Hal Turner, and graciously hosted him on his program. Turner won’t be be revisiting Hannity for a while because he is presently in prison serving 33 months for threatening judges.

3) Megyn Kelly: No one can spin a conspiracy theory quite like Beck, but Megyn Kelly comes pretty close. For months she’s been peddling a pseudo-scandal that alleges that the Department of Justice deliberately dismisses all charges of civil rights violations when the plaintiff is white. This has been debunked by the House Judiciary Committee’s Office of Professional Responsibility. Kelly also fronted phony investigations into the alleged terrorist ties of funders of the Park51 mosque in Manhattan. Somehow she left out the fact that one of those funders was Prince Alwaleed Bin Talal, the second largest shareholder of News Corp outside of the Murdoch family. Kelly has a permanently affixed expression of indignation and a vocal delivery that makes every story appear to be shocking. She is the human manifestation of Fox’s ever-present “FOX ALERT!”

4) Judge Andrew Napolitano: There are conspiratorial paths where even Beck fears to tread. Judge Andrew Napolitano has no such fears. He is a frequent guest of proto-conspiratorialist and Beck inspiration, Alex Jones. He is an avowed 9/11 Truther who says that the World Trade Center attack was an inside job. He believes that the health care bill contains provisions for a civilian military force to suppress domestic insurrection. And he also happens to be Beck’s most frequent fill-in host and a leading candidate to replace him.

5) Bill Sammon: Fox News’ Washington managing editor, Bill Sammon, has espoused a hard-core conservatism that predates Beck and emanates from the executive suites far above him. He came to Fox from the “Moonie” Washington Times and authored several books lionizing George W. Bush and lambasting Democrats. He was also caught authoring memos that directed his reporters to dispense a brazenly partisan point of view. For instance, he told them to refrain from using the term “public option” during the health care debate because focus group testing proved that the term “government-run” produced a more negative response. Even more disturbing, he was recorded admitting to a friendly audience on a conservative cruise that he “mischievously” cast Obama as a socialist even though he didn’t believe it himself. In other words, he lied to defame the President and rile up his gullible viewers. Beck must be so proud to have worked for him.

6) Neil Cavuto: The glorification of ignorance is a staple of Beck’s brand, but Neil Cavuto has been contributing to the collapse of America’s collective IQ far longer than Beck. He proudly hosts such respected policy analysts as Ted Nugent, Joe the Plumber, and any random Tea Bagger to help him unravel our nation’s dilemmas. One of his favorite idiocies is his insistence that Climate Change is a hoax because it gets cold in the winter. But Cavuto really shines when he brings in guests whose only connection to the segment is a juvenile pun. For instance, in a discussion about whether Tea Party support was grassroots or AstroTurf, Cavuto interviewed the CEO of AstroTurf Technologies, whose expertise with synthetic fiber products contributed nothing to the debate on campaign organization. Cavuto is the prop comic of pundits who delights in interrupting and shouting down Democrats who are naive enough to accept his invitations to appear.

7) Fox & Friends: While there will always be only one rodeo clown in the vast right-wing conspira-circus, there is no shortage of stooges, and three of them are featured on Fox & Friends. First we have Steve Doocy, who wondered “Why didn’t anybody ever mention that [Obama] spent the first decade of his life, raised by his Muslim father.” Perhaps because Obama actually never knew his father who left the family when he was two years old. Then there’s Brian Kilmeade who fans the racist flames by saying things like “all terrorists are Muslims.” And don’t forget Gretchen Carlson, who called the late Sen. Ted Kennedy a “hostile enemy” of the United States. All of these vile inanities were delivered without any help from Beck. However, it should be noted that when Beck made his infamous remarks about Obama being a racist he did it on Fox & Friends.

8) Fox Nation: Any good 21st century propaganda outfit has to have an Internet component, and for Fox News it is the Fox Nation. This web site’s sole purpose is to disseminate the most despicably dishonest disinformation it can invent. There are way too many examples to itemize, but here are a couple that represent the ridiculous and the repulsive. Last July Fox Nation featured a story that claimed that the Taliban was recruiting monkey mercenaries. This absurdity was sourced to the People’s Daily in China. Fox Nation also ran an item that speculated about Obama’s death. This article brought out the hate in the site’s readers who posted numerous comments indicating how welcome that would be. Many of the stories on Fox Nation percolate up to Fox News for broadcast and they they are no less deranged than the nonsense Beck comes up with.

9) Roger Ailes: The president and CEO of Fox News sets the tone for the network as a whole. Roger Ailes was a long-time media advisor to Republican candidates prior to launching Fox News. He is the network’s spiritual leader. If you ever wondered how Beck could get away with aligning President Obama (and anyone else with whom he disagrees) with Hitler, your curiosity was satisfied when Ailes lashed out at NPR saying that “They are, of course, Nazis. They have a kind of Nazi attitude. They are the left wing of Nazism.” Ailes’ remarks prove that the hate speech at Fox goes from the top down. It’s not now, and never has been, unique to Beck.

10) Rupert Murdoch: Speaking of the top – Rupert Murdoch, the Chairman and CEO of News Corp, is as high as you can get. He is the company’s captain and conscience. Every material decision requires his concurrence, including his employment of Glenn Beck. While Beck may be leaving, Murdoch is not (yet). It is, therefore, important to note that when Beck called the President a racist, Murdoch responded by saying that “it was something that, perhaps, shouldn’t have been said about the President, but if you actually assess what he [Beck] was talking about, he was right.”

Murdoch has consistently stood behind Beck for more than two years, defending him at every turn for every scandalous affair and affront. Even as advertisers fled in disgust, Murdoch never conceded an inch. In the television marketplace it is advertisers, not viewers, who are the broadcaster’s clients. Murdoch snubbed his clients in order to allow Beck’s Acute Paranoia Revue and Disinfotainment Revival Hour to continue poisoning minds and influencing elections.

More importantly, Murdoch and Ailes together have fashioned a network whose persona is infested with the same conservative extremist ideology popularized by Beck. The examples above illustrate how ingrained that ideology is into the Fox News schedule in all dayparts. And those programs are augmented by an army of propagandists that include Sarah Palin, Stuart Varney, Eric Bolling, Monica Crowley, Dick Morris, Frank Luntz, and many more.

With this dedicated team of activist anchors and contributors in place, Beck’s departure, though gossip-worthy, will change nothing at Fox News. Beck was not cast off because his message was objectionable, but because he was an ineffective messenger who was alienating the audience. His replacement will surely continue the sordid tradition of which Beck was just a small, irritating part. The Fox mission remains intact and any talk of redemption due merely to having thrown off this defective cog is naive and oblivious to the dark reality that is Fox News.