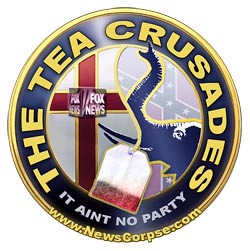 The ongoing conflict in Wisconsin between an intransigent, union-busting governor and the representatives of average, working Americans is trending consistently toward the position of the people. Despite millions of dollars of Koch Industries lobbying funds, the Republicans and union bashers are, in their own words, “losing ground.”

This is an excerpt from a recent fundraising letter sent by Tea Party Express (TPE) to supporters:

“Friends, new polls coming out in Wisconsin show that the Obama-Labor Union ad campaign against him is having an impact. Governor Walker has started losing ground…”

Actually, the old polls were showing that as well. What is new is that even reliably right-leaning pollsters like Rasmussen are now showing that Governor Scott Walker is viewed unfavorably by nearly 60% of his constituents. The despondent correspondence goes on to say that…

“If we lose in Wisconsin then Republican Governors across America will take the lesson that they should give in and capitulate, and all the progress we have seen from the tea party movement will be undone,”

Indeed. Both sides of this debate recognize the impact that the conclusion will have on similar debates across the country. It’s interesting that TPE is so concerned about a defeat in Wisconsin that they believe it will undo “all the progress” they’ve made. But what is even more interesting is that they are directing this concern to only Republican governors.

That focus is something that I have been addressing for months, and that the media needs to acknowledge: There Is No Tea Party!

Republican Party spokesmen:
John Boehner, House Minority Leader: There really is no difference between what Republicans believe in and what the tea party activists believe in.

Tea Party spokesmen:
Mark Skoda, Tea Party Leader: This movement is beginning to mature … not as a third party but a force to be reckoned with in the traditional party structure.

See? Everybody agrees that there is no Tea Party. It is journalistic fraud to persist with the charade. This is especially true of Tea Party Express, which was created by the Republican consulting firm of Russo/Marsh. Sal Russo runs TPE as a revenue center for his firm, funneling most of their donations right back into his wallet. And for some inexplicable reason this is the corrupt, phony Tea Party clan that CNN has hooked up with to host a Republican (of course) presidential primary debate.

This is madness. If the press treats the Tea Party as a separate entity and gives them a voice distinct from their Republican source, they are in effect giving the GOP twice as much exposure as the Democrats. To be fair and balanced they would have to regard MoveOn.org or the SEIU as a separate party and hire their spokespeople as news analysts and feature their responses to official GOP dogma – in addition to that of actual Democrats. I don’t see that happening.

In the meantime, the Tea Party is growing noticeably more desperate. Their latest fundraising appeal is evidence of how seriously they take their declining popularity in Wisconsin and the impact of that nationwide. They have never really been a popular movement as most polls have pegged their support in the teens with pluralities having no opinion. And their views have been shown to be wildly out of touch with mainstream Americans.

The media has to be pressed to justify their misrepresentation of Tea Partiers. Either that or put me on every panel where they have a Republican posing as something that doesn’t exist.