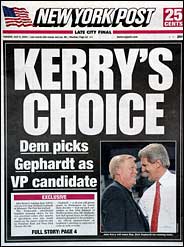 This is just too much fun. Stroll with me down the serene avenues of yesteryear when the New York Post scooped out the still beating hearts of their media rivals by reporting that the newly minted Democratic nominee for president, John Kerry, had chosen Dick Gephardt to be his running mate. The headline bellowed the triumph of their proud accomplishment. Only one thing could mar this sweet moment of success – It wasn’t true. Kerry, of course, had selected John Edwards to share the ticket with him.

Now we learn that the bad tip may have come from the DNC and was swallowed whole by Rupert’s scion, Lachlan Murdoch, then publisher of the Post. According to former Post staffer, Ian Spiegelman, Lachlan bought the story wholesale and ordered his editorial team to run it. Says Spiegelman…

“Everyone at The Post, including [Editor in chief] Col Allan and his top deputies, knew the story had been planted with Lachlan by the Democratic National Committee to make him, and The Post, appear foolish on a national level.”

Everyone but Lachlan Murdoch. But that didn’t stop him from demanding that his more experienced underlings obey his tyrannical and ignorant decrees. Like father like son.

2 thoughts on “The Murdoch Family Resemblance”