The “stable genius” currently occupying the White House is exhibiting symptoms of severe mental distress. That isn’t anything new, however, it is dreadfully apparent that Donald Trump is descending to new and more absurd lows. The most likely reason for this is that it is getting closer to November 3rd and his prospects for reelection continue to hover somewhere between dismal and preposterous. 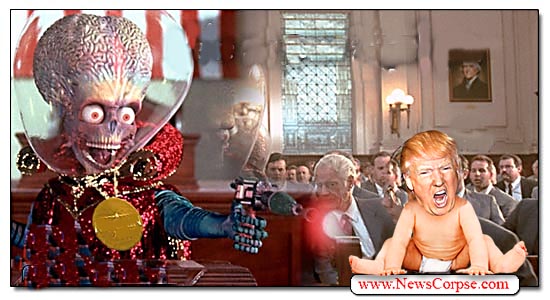 The grievous stench of desperation is enveloping Trump like a dark and low-hanging cloud. It’s manifesting in his clinging reliance on his Fox News pacifiers. Trump has done five “interviews” with Fox hosts in four days, including Sean Hannity, Tucker Carlson, Mark Levin, and Maria Bartiromo twice.

The second Bartiromo segment aired Sunday morning and featured Trump making bizarre comments that only offer further proof of his psychoses. For instance, after being asked, he was unable to coherently articulate a second term agenda beyond prematurely opening up the country and bashing Democrats. He claimed he was “cured” of the coronavirus and is now “immune,” neither of which is medically sound. What’s more, he said that he has a “protective glow“ that will protect others from any contagious threat he might pose. He also bragged that there have been “only” 214,000 deaths from the coronavirus, which he characterized as success.

These are the ravings of a madman. But Trump was just warming up for his answer to the final question of the segment. Bartiromo asked him if he could explain “why the Department of Defense has set up a UFO task force […] Mr President, as we wrap up here, are there UFOs?” Trump gave the question serious consideration and replied:

“Well, I’m gonna have to check on that. I heard that. I heard that two days ago. So I’ll check on that. I’ll take a good strong look at that. But I will tell you this, we have now created a military the likes of which we’ve never had before, in terms of equipment. The equipment that we have, the weapons that we have – and hope to God we never have to use them – but we have created a military the likes of which nobody has ever had. Russia, China, they’re all envious of what we have. All built in the USA.”

Isn’t it comforting to know that Trump is going to “take a good strong look at” the existence of potentially hostile UFOs? But more importantly, if those space aliens try anything they are gonna regret it. Trump is saying that he has built the most powerful military, not just on Earth, but in the entire universe. Those aliens, who despite having have mastered interstellar travel, don’t stand a chance against Trump’s Space Force. Never mind that everything Trump said about having enhanced the military is another of his flagrant lies about alleged achievements.

It’s episodes like this that make it impossible to ignore speculation that Trump is suffering from the psychotic side effects of the medications he’s been taking to combat the coronavirus. Steroids and the other immuno-response drugs that he has been prescribed are known to produce mood swings, anxieties, and delirium. And so much of Trump’s recent rantings have all the signals of mental infirmity. In recent days he has been both attacking and embracing Fox News. He accused Nancy Pelosi of being crazy. He claimed, Messiah like, that he got COVID-19 because he was “doing it for us.” And shortly after his visit with Bartiromo, Trump tweeted that…

A total and complete sign off from White House Doctors yesterday. That means I can’t get it (immune), and can’t give it. Very nice to know!!!

That, of course, is utterly false. No verifiable study has concluded that having contracted the coronavirus produces immunity from either getting or giving the disease. Trump’s tweet was flagged by Twitter for “spreading misleading and potentially harmful information.” Not that telling obvious lies is out of character for Trump. But he may have to be more careful when he’s dealing with the aliens. They may have truth rays.