The manic frenzy that is displayed daily on the Twitter feed of Donald Trump is especially heated this Monday morning. He posted 75 tweets before 3:00pm in what may break his all time record of 123 tweets in single day. It’s impossible to say at this point whether the reason for this crazed output is his acute panic at the prospect of a landslide electoral loss to Joe Biden in three weeks, or the side effects of the drugs he’s been taking to treat his coronavirus. Or maybe a catastrophic combination of both. 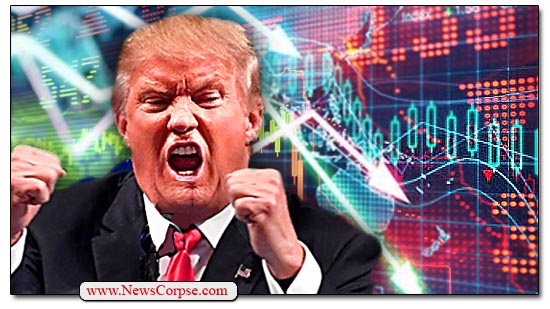 The flurry of frantic and anxious outbursts that make up this tweetstorm run the gamut of Trump’s paranoid psychoses. For instance, Trump tweeted about a “Big spike in the China Plague in Europe,” in an attempt to compare it to the U.S., which he apparently doesn’t know is suffering from a similar or worse spike. He tweeted that New York and California are “going to hell.” Which is an odd campaign strategy of maligning the biggest states in the country that you’re supposedly leading. He tweeted that he is “winning BIG in all of the polls that matter.” Which I guess are the polls of boaters and maskless bar patrons. But he wasn’t through.

Trump also tweeted that “We will have Healthcare which is FAR BETTER than ObamaCare, at a FAR LOWER COST.” Which is documented in the invisible plan that he has been saying for three years that he will release in two weeks. And as an indication of what is most important to him, Trump posted ten tweets in support of Eric Early, who running a laughably futile campaign against Rep. Adam Schiff of California. Schiff may be the member of Congress Trump despises most after Speaker Nancy Pelosi. That’s more tweets than he posted in support of his Supreme Court nominee, Amy Coney Barrett.

However, perhaps the most enthusiastic of Trump’s twittery concerned the performance of the stock market. He managed to get something right for once by noting that it was going up. However, he has no idea why it’s doing so. He, of course, thinks he’s responsible for it. And in a way he is, but not in the way he thinks.

Trump has been shouting from the White House rooftop for weeks that a Biden presidency will thrust the nation into a depression. Let’s just set aside the fact that we are already in a recession during the Trump presidency. Trump’s tweets are cheering on the market’s rise along with fear mongering about a collapse if Biden is elected. Never mind that Obama and Biden presided over a much more robust economic recovery and market advance than Trump has. The five tweets he posted on this subject were evidence of nothing more than Trump’s ignorance and ego. For example…

Remember, Stock Market at an All Time High, and going up. 401k’s at RECORD. With Sleepy Joe comes Tax Increases, jobs losses and DEPRESSION like never seen before!!! VOTE!!!

What Trump is missing is that the rise in the market is occurring simultaneously to the rise in Biden’s polling against Trump. The greater the margin of Biden’s lead, the higher the market goes. That’s the market indicating that it is looking forward to a Biden victory. The market is always representative of the future. And this isn’t just a coincidental observation. According to Goldman Sachs, “A Democratic sweep would mean faster economic recovery.”

“…’a blue wave would likely prompt us to upgrade our forecasts,’ Goldman Sachs chief economist Jan Hatzius wrote in a Monday report.”

Hatzius went on to note that a blue wave would increase the likelihood of a coronavirus relief bill. He also noted the positive impact of Biden’s spending plans on infrastructure, climate, health care and education. But that isn’t all. Moody’s also weighed in saying that…

“Moody’s Analytics found that Biden’s economic proposals, if enacted, would create 7.4 million more jobs than would Trump’s. The economy would return to full employment in the second half of 2022, nearly two years earlier than under Trump’s plan, Moody’s said.”

Of course, none of this is a guarantee that the market will continue going straight up. There are distinct warning signs for a down turn. The market is already over-valued in some analysts opinions. And the overweighting of just a few stocks (more than 20% of the S&P) that uncharacteristically benefit from the current conditions (Apple: 7.3%, Microsoft: 5.9%, Amazon: 5.3%, Google: 2.4%, and Facebook: 2.4%) don’t tell the market’s whole story. And as anyone with the slightest inkling of knowledge is aware (which leaves Trump out), the stock market is not the economy. Most Americans do not own stocks.

There is, however, one thing that can’t be denied. If Trump’s fear mongering were correct, the market would have been on a downward trend for at least the past couple of months. Clearly the financial institutions that drive the market don’t agree with Trump. The fact that it’s strong and rising is a testament to the market’s confidence in, and preference for, a Biden presidency.

So keep that in mind when voting. And tell your friends and family. It is Trump who has proven to be an economic imbecile who declared bankruptcy on six separate occasions, lost billions of dollars during the boom times, and currently owes more than $400 billion to – well, we don’t know who because he refuses to release his tax returns. That by itself is reason enough to remove Trump from office. And also to investigate him for criminal activity and crimes against the state.