The trial of teen vigilante Kyle Rittenhouse has produced some bizarre and legally questionable moments. Many of those moments relate directly to the behavior of Judge Bruce Schroeder whose rulings have overwhelming favored the defense and been openly hostile to the prosecution. 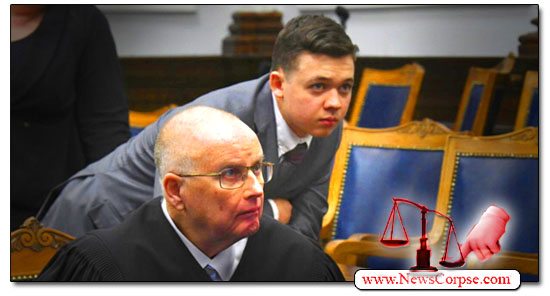 On Thursday this tendency of Schroeder to put his right-wing prejudices on display crossed another line of propriety for a jurist. Responding to a report that a reporter allegedly working for MSNBC News was following a bus that was transporting the jurors, Schroeder interrupted the proceedings to make this alarming declaration:

“I have instructed that no one from MSNBC news will be permitted in this building for the duration of this trial. This is a very serious matter and I don’t know what the ultimate truth of it is, but absolutely it would go without much thinking that someone who is following a jury bus, that is an extremely serious matter will be referred to the proper authorities for further action.”

NBC News denies that its journalists contacted, or intended to contact, jury members in the Rittenhouse trial: https://t.co/JWAG22XXFm

This is indeed a “very serious matter,” but not for the reasons that Schroeder suggests. There are several problems with how the Judge reacted to this report. First of all, in his statement he admits that he “I don’t know what the ultimate truth of it is.” But he issues his prohibition against MSNBC News anyway. What if the truth is that the reporter was not from MSNBC? What if there was nothing untoward taking place? Then Schroeder punished the network despite it having done nothing to warrant it. That is the definition of government censorship and violates the First Amendment of the Constitution.

What’s more, Schroeder may have gotten the network wrong. Reports variously describe the reporter as having been associated with MSNBC or NBC, two different networks. So it’s pretty sloppy of the Judge to impose such severe penalties when he doesn’t even know who the suspected offender is affiliated with. In addition to that, it is ridiculous to ban MSNBC from the courtroom when reporters from NBC, who were not covered by the order, are still permitted to cover the trial. They can then appear on MSNBC to give their account of the proceedings.

Finally, Schroeder took the extreme measure of banning the entire MSNBC network, rather than just the alleged offender. At best he could have argued that the reporter who was involved should have his courtroom privileges suspended, not for the duration of the trial, but until the facts were ascertained. But Schroeder didn’t take that rational step. Instead he punished everyone at MSNBC, despite the fact that none of them had done anything wrong. It also needs to be remembered that the reporter in question wasn’t found to have done anything wrong either. NBC News released a statement saying that…

Rittenhouse’s defense attorney has already filed a motion for a mistrial, which Schroeder has yet to rule on. But if anyone is entitled to a mistrial, it’s the prosecution. And Schroeder should be cited for judicial misconduct. He has shown bias throughout this trial. And his disrespect for the Constitution’s guarantee of freedom of the press makes his malfeasance on the bench all the more reprehensible.