It seems that every day Fox Nation is widening the gap between their reporting and reality. Today they featured this article about an Iraq War veteran who was seriously injured at the Occupy Oakland demonstration: 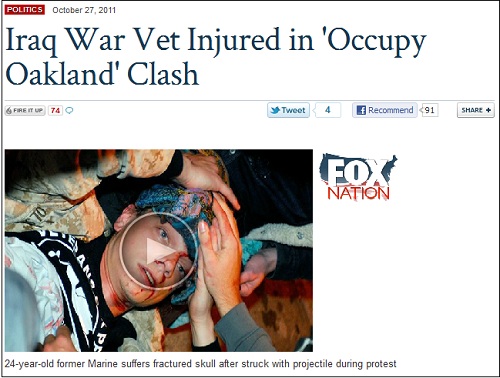 Notice that the entire article consists of a single line that says only that Scott Olsen, a “24 year-old former Marine suffers fractured skull after struck with projectile during protest.”

What did the Fox Nationalists leave out? Well, just that the projectile that fractured Olsen’s skull was fired by Oakland Police. And after other protesters came to Olsen’s aid, the police lobbed a tear gas canister into the middle of the crowd who were trying to help him.

This is Fox Nation’s way of attempting to malign the protesters as violent by publishing misleading and incomplete stories. They are relying on their audience being dimwitted sheep in order to get away with this sort of deception. Obviously they know their audience very well.