In a desperate play for attention, Rush Limbaugh has taken to defending Fox News analyst Sarah Palin, who was recently the subject of a Democratic fundraising video. However, the form of Limbaugh’s defense may be not be particularly complimentary. 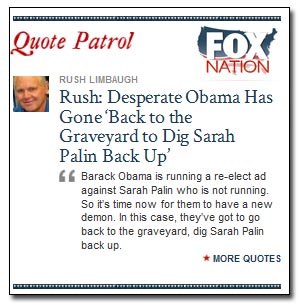 Limbaugh: Barack Obama is running a re-elect ad against Sarah Palin who is not running. So it’s time now for them to have a new demon. In this case, they’ve got to go back to the graveyard, dig Sarah Palin back up.

The graveyard? I wonder how Palin’s Facebook ghost writers will respond to this insult. Limbaugh is echoing the same sentiment that Fox News expressed yesterday on their Fox Nation web site when they complained that “Four years later, President Obama is still running against Sarah Palin.” The general consensus among these conservatives is that Palin is a has-been who is not worthy of attention, despite her current employment by Fox News and her hints that she would accept the GOP nomination for president at a brokered convention.

Limbaugh continued his remarks regarding Palin to assert that there is conspiracy to demean the woman he regards as irrelevant:

“And it’s bouncing off of the HBO movie, Game Change. Which is all part of the plan. It’s all part of a brilliantly conceived plan that they hope will be a flawlessly executed plan. Now they’ve got the movie based on the book, Game Change. And it makes Palin and all these Republicans look like idiots. The heroes in that movie are the people who are portrayed as knowing Palin was the wrong choice, and admitting that Palin’s stupid.”

For the record, the characterization of Palin in the book and movie, Game Change, has been affirmed by the Republican campaign strategists for McCain/Palin and her own handlers. If there is a conspiracy it is being orchestrated from the right, not the White House.

The real problem that Limbaugh is dealing with is his own irrelevancy. In the past couple of weeks he has lost more than a hundred advertisers due to his boorish misogyny. His show is running with cheap local ads, free public service announcements, and even dead air. Nevertheless, Limbaugh and his supporters are steadfast in their insistence that none of this has hurt Limbaugh or his show. Fox Nation posted an article claiming, without any evidence whatsoever, that he has “Has the Biggest Audience He’s Had in Years.” But we’ve heard that kind of denial before:

2 thoughts on “Rush Limbaugh: Digging Sarah Palin Up From The Grave”