[Update 9/20/2012: The hypocrites at Fox News have done it again. This time they are incensed about a campaign poster that has an Obama logo on it]

The Patriopathic zealots at Fox News are mightily disturbed by an American flag that was modified to place a picture of an American president where the field of stars is normally seen. They published a story about this outrage at the top of their web site this morning, complete with a snarky comment about China. The only problem with that is that their outrage, as usual, is selectively distributed. Fox News is firmly against flag desecration unless it is committed by the Tea Party or other conservative defilers. 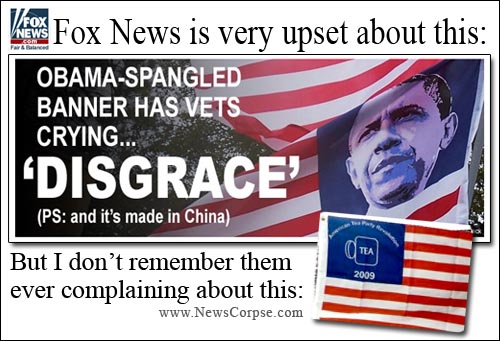 Technically, it is considered desecration anytime a flag is altered. The Obama flag, therefore, is an inappropriate modification. But the same is true for the Tea Party flag. In fact, the same is true for flag fashion (such as the flag bikinis frequently featured on Fox) and signatures on the flag (which Bush and Palin have done at their rallies). So I wonder when Fox News will feature a headline article about these disgraceful America-haters: