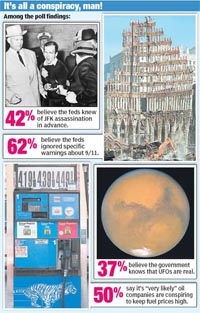 “Sixty-two percent of those polled thought it was “very likely” or “somewhat likely” that federal officials turned a blind eye to specific warnings of the 2001 attacks on the World Trade Center and Pentagon.”

Accompanying that statistic was this blaring headline:

‘BLAME U.S. FOR 9/11’ IDIOTS IN MAJORITYBut just eight months after the World Trade Center attacks, the Post printed on their front page a story declaring that “Bush Knew” about warnings directed at U.S. civil aviation.

Despite that admission, Fleischer called the headline “irresponsible” and “a poster child for bad journalism.”

So after publishing an article that alleged that federal officials knew about, but did not respond to, warnings about terrorist attacks, the Post now calls Americans who are aware of that fact “idiots.” Of course the real idiots are the editors at the Post who don’t even know what their own paper reports. But it’s even worse than that. After the “Bush Knew” issue hit the streets, Post editor Col Allen defended the headline saying…

“I reject the notion that the headline suggests that Bush knew about 9/11. . . . ‘9/11 bombshell’ was there to tell people this was a story about terror.”

Oh really? What was “Bush Knew” there to tell people if it wasn’t to suggest that Bush knew? Apparently, even when someone at the Post reads the Post they can’t understand what it’s saying – even its editor.