Fox Nation is famous for calling liberals everything from Marxists to traitors. Of course, they never have anything to back it up. but that’s beside the point. Today they are complaining that the Southern Poverty Law Center (SPLC) called a rogue band of anarchists “the radical right.” The anarchists had at first attempted unsuccessfully to affiliate themselves with the Occupy movement. The Fox Nationalists were steeped in outrage at the suggestion that alleged domestic terrorists would be associated with right-wingers even though there are many examples of just that. 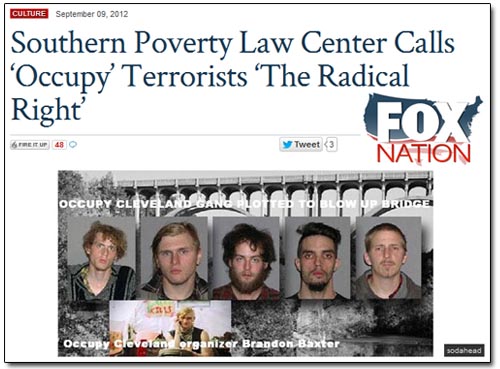 However, where the Fox Nationalists separated themselves from reality in this instance is simpler to explain. The article to which they linked (from the preposterously-named American Thinker) cited a news item published by the SPLC that actually contains no reference whatsoever to the “radial right” or any connection to these suspects. Nothing. Zilch. Not even an insinuation. There was no mention of conservatives, Republicans, the Tea Party, or any other component of right-wing politics. Their contention is completely and utterly imaginary.

The only possible explanations for this deranged bout of paranoia are either LSD poisoning or that Fox is escalating their attacks on the SPLC out of vengeance for the organization’s recent categorization of the Family Research Council as a hate group due to its demonization of gays and lesbians. Fox immediately came to the defense of the FRC and even allowed its president airtime to falsely blame the SPLC for a shooting at an FRC office. So now Fox is taking every opportunity to further slander the SPLC, even if they have to invent their attacks out of thin air.

While there was no implication of the right-wing in the SPLC’s article, there was a statement by one of those arrested that vindicates the Occupy movement from the false accusations that it tolerates violence or those who propose it. Brandon Baxter told FBI agents during his interrogation that…

“I’ve been working with Occupy and it’s like I can’t even get them to do anything that would upset people,” Baxter told FBI agents, according to court documents. Those he met in the Occupy Movement, Baxter said, wouldn’t “disrupt traffic … do anything illegal. A lot of laws are, are ridiculous. Can’t even get people to jay walk half the time in a march, or take the march off the sidewalk into the street. It’s like, ridiculous.”

Those are the words of an anarchist who tried to recruit Occupiers into engaging in more violent activities, but found no takers. He actually complained to the FBI of his frustration that the Occupiers were just way too law abiding.

For Fox Nation to post a headline that is so blatantly false is just another example of their hostility to the truth and their lack of journalistic ethics. As if we needed more examples.