One of the best ways that experienced debate watchers know when one side has lost is if that side spends most of their time criticizing the moderator and/or the style of their opponent. That’s a clear sign that they believe they came up short on substance. And it’s precisely what Ryan’s side did from the moment the debate ended.

Twitter was buzzing with conservatives whining that moderator Martha Radditz was biased in favor of Biden, even though they had little evidence to cite for that assertion. Much of their complaining reached back twenty years to her 1991 wedding where President Obama was a guest of the groom. They conveniently wipe from their consciousness the fact that Radditz divorced Obama’s pal in 1997 and the unlikelihood that she would be inclined to do a favor for a friend of the friend of her ex-husband.

Fox News leaped to the aid of their client, resuming their role as PR agency for the GOP. And since they were no better able to attack on substance, they obsessively harped on Biden’s demeanor. 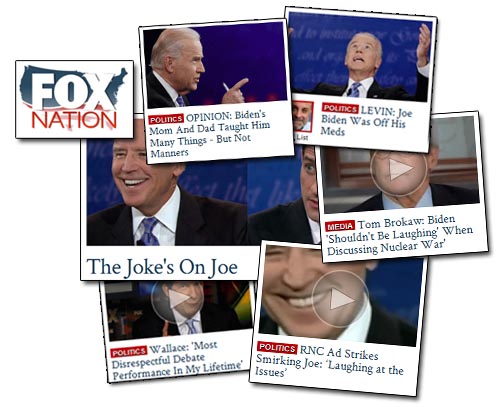 They regarded his smiling and laughing as flaws that demonstrated disrespect for Ryan. But seriously, if that’s all they’ve got they might as well admit they were crushed by Biden’s command of the debate. In fact, it was clear that when Biden was laughing it was almost always in response to Ryan saying something that was blatantly false. Biden’s smile was a pretty good sign that Ryan had just lied. And had Biden remained straight-faced you can bet that he would have been castigated by the same critics as dour and unlikeable (sort of like Ryan).

Fox News also made an effort to skew the public reaction to the debate and, true to form, they outright lied. There were two post-debate polls conducted – one by CBS that showed Biden winning 50-32, and one by CNN that put Ryan ahead 48-44. Fox News reported that two polls placed Ryan in the lead.

The way that Fox arrived at this conclusion was by including an online survey by CNBC. That was actually just a web question that could be answered by anyone who visited their site. It was not a scientific poll. In fact, while the numbers did put Ryan ahead (36-56) when Fox first reported them Thursday evening, later on Friday morning the same poll showed Biden leading (52-44). 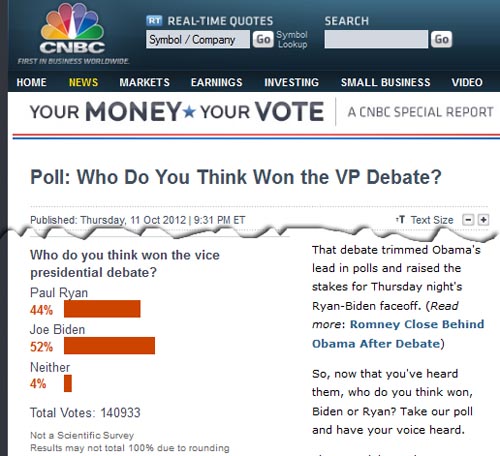 Nevertheless, Fox was still reporting the older numbers of this non-poll. When Steve Doocy brought it up on Fox & Friends he only mentioned that two polls favored Ryan. Then, when Brian Kilmeade noted a third poll by CBS, Doocy dismissed it saying that it was just a focus group with only 50 people. In fact, CBS conducted a conventional poll with 431 respondents. So Doocy lied to throw out CBS’s real poll while embracing CNBC’s fake one.

Much of the media followed the same course with Politico, The Guardian, The Daily Caller, The Washington Examiner, National Review, and Breitbart Nwes, all characterizing what CNBC posted as an actual poll. This tendency to promote dishonest information fits nicely in the GOP’s new post-truth era. Which brings us back to Paul Ryan, who did his part by dropping at least two lies during the debate that had previously been found to be “Pants-on-Fire” lies by PolitiFact. And not being a slacker, one of Ryans lies was actually the “Lie of the Year” in 2010. Nice work, Paul.

3 thoughts on “Fox News Knows Ryan Lost Debate, So They Resort To Distractions And Lies”