This may be one of the most asinine stunts Glenn Beck has ever engaged in. Apparently he was mocking an art exhibit that featured a painting of President Obama with his arms outstretched and a wearing a crown of thorns. That’s not a particularly original concept as I did a similar work years ago featuring Beck:

When I did my artwork portraying Beck as a Messianic figure it was in response to Beck’s own behavior and his wailing about being the subject of attacks. He wept and hollered and whined that he was being persecuted. Obama has never done any of those things.

Beck’s lame attempt at satirizing Serrano’s “Piss Christ” was really just a big waste of time – which makes it no different than anything else Beck does. On this occasion he dropped a toy Obama doll into what he said was a jar of his own urine. Beck asserted that he was only defending the First Amendment’s protection of freedom of expression, but there was really nothing of substance that he had to say about either the artwork or the Constitution. He just seemed to be getting an excessive amount of personal pleasure from his childish prank that was really nothing more than a desperate attempt to get publicity. 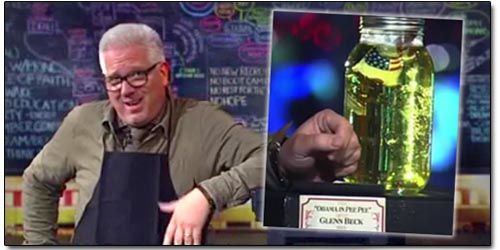 The pretend artwork that Beck introduced in his pretend French accent was placed up for auction on eBay and generated bids in excess of $11,000 before eBay removed it. That says something about what his followers find valuable. What he seemed to have missed entirely, however, was that he was also submerging an American flag in the jar of pee. How patriotic of him.

And there was more craziness emanating from Beck yesterday. He delivered a sermon about his search for a plan to save the world. It was a disturbing display of a psychosis that should be troubling to anyone concerned about his mental health. In the course of the sermon he lamented that God was trying to tell him what he should do, but there was just so much that he was overwhelmed.

How can one guy with a video blog reform politics, culture, the economy, education, family, media, and the faith of a nation? Beck looked into the camera and lamented that he had no idea of how to do all of this – yet. But he was getting close to figuring it out. And he had diagrammed his draft of the solution on a giant chalkboard. But it looked like the scribblings of someone in the midst of a schizophrenic seizure, or peaking on LSD, or both. 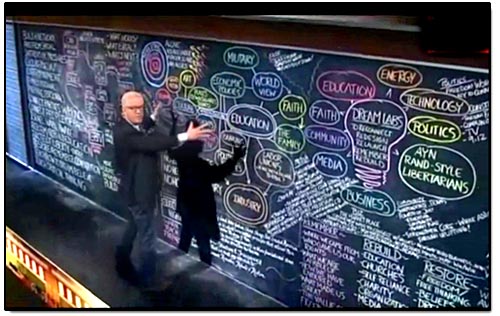 Seriously, this dude needs help. It’s really too bad that the people in his life are too dependent on his cash generation to intervene and get him into therapy. When he goes off it is going to be messy.