Confirming the ratings slowdown of Fox News post-election, the November ratings show Fox with a comparatively small increase for November 2012 over their numbers for the same month in 2011. While all three networks rose due to this being an election year, Fox’s unimpressive 55% bump was barely half the leap of either CNN or MSNBC. 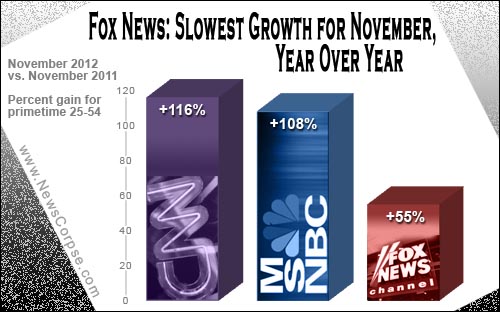 Perhaps this what you get when you deceive your audience by leading them to believe that their lame candidate was actually in contention despite all the objective evidence to the contrary. Prior to election day Fox hyped notably partisan polls like Rasmussen, and famously idiotic pundits like Dick Morris, who confidently declared that Romney would win in a landslide.

Then, on election night, Fox continued the charade by hosting Karl Rove, who refused to accept the reality of Romney’s defeat. The spectacle that played out on live television had Rove arguing with Fox’s election desk. This caused Anchor Megyn Kelly to ask Rove “Is this just math that you do as a Republican to make yourself feel better, or is this real?” Only on Fox would someone seriously ask their own paid contributor if what he was saying was real.

Since the election Fox News has struggled to make sense of a world they had tried so hard to pretend did not exist – a world where a socialist, Muslim from Kenya could prevail over the richest presidential candidate ever put forward by a major political party. What has America come to?

The flagrant fallacies tendered by Fox were insufficient to topple Obama from his pedestal. Not his trysts with commies like Bill Ayres, nor his scandalous Fast and Furious gunrunning, nor his sordid embrace of gay soldiers, nor his lack of a birth certificate, and not even his culpability for a devastating hurricane, could prevent the President’s reelection. And since all of these would-be scandals were propagated by Fox News, it’s possible their audience is no longer willing to accept what they say at two-faced value.

It’s still too soon to make any predictions about the future rankings of the cable news market. The Fox audience may yet prove to be as gullible and prone to deception as ever. But for the time being there is a glimmer of hope that the marketplace will make purveyors of faulty products pay a price.

If anyone bought a pair of shoes that were as poorly constructed and uncomfortable as most of the stories on Fox News, that shoe company would quickly go out of business. Now we have just to wait to find out if a significant number of Americans are willing to bear the pain of walking another mile in Fox Shoes.