In a Fox News op-ed, Dan Gainor, of the uber-conservative Media Research Center, hurled some disparaging and nearly incoherent insults at Touré, one of the hosts of MSNBC’s The Cycle.

Gainor took issue with a commentary Touré delivered (video below) about the GOP’s unfounded and politically-motivated attack on UN ambassador Susan Rice. Touré made some rather cogent points about the spectacle Rice’s critics, particularly Sen. John McCain, were making over a manufactured controversy. McCain and others seem feverishly obsessed with Amb. Rice’s comments on a number of Sunday news programs regarding Benghazi. Any fair observer would have to recognize that what Rice said was provided to her by intelligence authorities and was the best information available (or permitted to be disclosed) at the time. But fair observation is not the business that Gainor and the MRC are in.

Gainor’s tirade was topped with a headline that read “MSNBC Anchor Touré makes shameful attack on McCain.” What constitutes shamefulness to Gainor is hard to figure. His specific complaints were that Touré was playing the “race card” in his remarks. But Gainor’s examples were not the least bit focused on race. For instance, Gainor cited Touré saying that McCain…

“…gave us the horrible optics of he and Lindsey Graham as old, white, establishment folks wrongly and repeatedly attacking a much younger black woman moments after an election in which blacks and women went strongly blue.”

Gainor’s shallow grasp of the English language resulted in his interpreting that as a racial criticism of McCain. However, the rest of the English speaking world would notice that Touré was speaking about the “optics” of the criticism, not whether there was any actual racism involved. Touré was plainly addressing the potential harm for the Republican Party in being perceived as insensitive to racial and gender issues by repeatedly attacking minorities and women. That’s not an accusation of racism or sexism, it is an acknowledgement that the subjects of such attacks might be less likely to support those who make the attacks. That’s not only common sense, it is precisely what occurred on election day a couple of weeks ago. And to affirm how cognitively-challenged Gainor is, he added this as further evidence of Touré’s alleged race-baiting:

“Never one to ignore a chance to paint all Republicans as racist, he added one more dig: ‘Looks like the GOP is already laying the foundation for losing in 2016.'”

How is that one more “dig” that paints anyone as racist? If anything, it is one more affirmation that Touré was speaking only about political matters. Nevertheless, Gainor is determined to turn this into a “shameful” racial affair. With that purpose in mind Gainor reached back to a September column wherein Touré wrote “Part of my job when I speak about politics is to speak up for black people and say things black people need said.” If Gainor thinks that that is shameful, he needs an EKG EEG stat, because there is good reason to suspect that there is no brain activity going on his head. The reason that it is important to have diversity in the media is precisely because it provides perspectives that otherwise would not be represented. Our media is enhanced by the inclusion of minorities and women who say the things that these previously excluded members of society need said.

Notwithstanding the fact that Gainor’s tantrum over Touré’s commentary was ridiculous and he failed to identify anything remotely racial about it, Fox News is demonstrably racist and the evidence of that is in its coverage. While it may be too broad to say that Fox’s attacks on Amb. Rice alone constitute racism, take a look at some of the most prominent targets of Fox’s smear machine and ask yourself what they have in common: 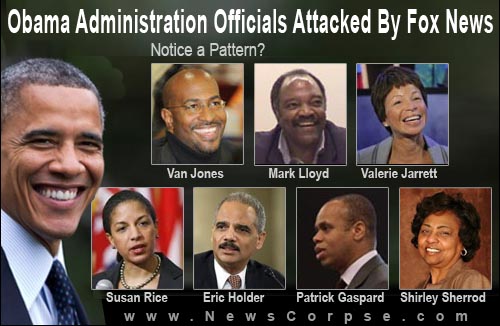 That pretty much says it all. If Touré had wanted to make an issue of racism, he would have plenty of evidence.