The year is only about two weeks old but a strong entry has already been made to capture the “Stupidest Article Of The Year” award. And to no one’s surprise, a perennial favorite in the competition to achieve Olympian idiocy has leaped to front of the pack. 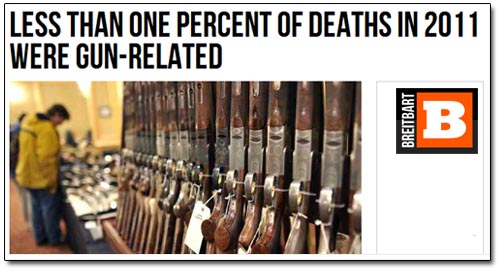 Breitbart News has few rivals when it comes to jaw-dropping dimwittedness. And they have once again proven their mettle with an article sporting the headline “Less Than One Percent Of Deaths In 2011 Were Gun-Related.” Here’s an excerpt:

“The media regularly twists gun numbers to make gun-related deaths appear predominant over every other type of death in this country. However, a rational examination of how small the percentage of gun-related deaths are when compared to the overall number of deaths in any given year helps one to see through the hype.”

The blockheads at Breitbart are actually trying to deceptively distort the argument by comparing the number of deaths by guns to the total number of all deaths, including old age, disease, accidents, and auto-erotic asphyxiation (that last one was thrown in as a frame of reference for the Breitbrats who probably have personal experience with it).

Over two and a half million people died in 2011 for all combined reasons. It is utterly irrelevant to compare that number to just the deaths caused by guns and conclude that such deaths are therefore not a problem. A proper analysis would be to compare gun-related deaths to other types of similar fatalities. But by the perverse logic employed by the Breitbrats tuberculosis, AIDS, asthma, influenza, Parkinson’s disease, leukemia, and prostate or ovarian cancers are also not a problem. According to the Centers for Disease Control they all have death rates that are less than or equivalent to gun-related deaths. So rest easy America.

If all of that weren’t bad enough, the Breitbrats can’t even get their statistics straight. Their article claims that “in 2011, the total number of gun-related deaths was 8,583.” However, the actual number is 32,163 – a discrepancy of a mere 375 percent. That’s the sort of buffoonery that will make Breitbart a challenge to defeat as the year in stupid progresses. So congratulations to them on their world-class ignorance, and to the other contenders (i.e. Fox News, Daily Caller, WorldNetDaily, Newsbusters, et al), Don’t give up, the year is still young.

10 thoughts on “Breitbart Takes An Early Lead In The ‘Stupidest Article Of The Year’ Contest: On Gun-Related Deaths”