As reported earlier this week, citizen video mangler James O’Keefe has produced another in his series of fraudulent smear pieces. His latest is an attempt to embarrass a few newspaper folks by ambushing them with an utterly ridiculous bit of theater that proves nothing and only serves to embarrass O’Keefe and his company of juvenile players. 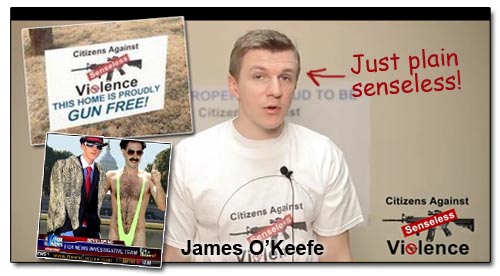 O’Keefe’s new video excrement has received attention only on the most disreputable outlets such as WorldNetDaily and the Daily Caller. And from the looks of it, that’s even more attention than it deserves. His circle of propagandists is apparently shrinking. Neither Fox News nor his mentor Breitbart has posted the video or even a story announcing it.

The video itself is ten minutes of mind-numbing boredom as O’Keefe’s flunkies accost people with appeals to put a stupid sign on their lawns. As usual, it was heavily edited to disparage the ambushees and O’Keefe inserted a lame, studio-produced introduction wherein he falsely asserts that gun safety advocates want to “take all guns from everyone,” a policy that no one has proposed. His ludicrous and unsupported conclusion was that “We didn’t find any members of the media with the strength of their convictions.” But that would only be true if any of his victims had ever expressed a conviction to favor the message on his infantile signs – which they did not.

Finally, O’Keefe’s flunkies may have committed yet another crime on behalf of his crusade to debase journalism. When approached by an officer from the Washington, D.C. police department outside of the home of Attorney General Eric Holder, they told him that they were from a gun control organization. Of course, they were not and the organization they claimed to represent does not exist. That may constitute giving false testimony to a law enforcement representative who was investigating a complaint, or even worse, obstruction of justice.

O’Keefe is a serial offender. In addition to his conviction for unlawful actions taken in the office of a United States senator (for which he is still on probation), he has broken election laws and invaded the privacy of people from whom he had not acquired consent to record. He even tried to entrap a CNN reporter in a perverse sting on his “Love Boat.” This latest violation of the law ought to be prosecuted as well and, at the very least, his probation should be revoked. Now that would be justice.