This year’s Conservative Political Action Conference begins Thursday and promises to be a treasure trove of comedy material that will give a big boost to Democrats and progressives. 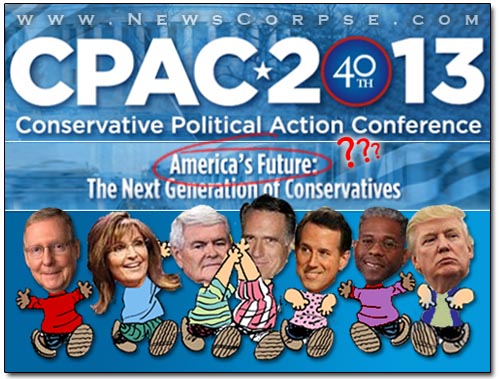 Having learned nothing whatsoever from the 2012 election, CPAC has dubbed this year’s event “America’s Future: The Next Generation of Conservatives.” Then they loaded up the schedule with fresh-faced Tea-publicans like Mitt Romney, Sarah Palin, Mitch McConnell, Newt Gingrich, Allen West, Rick Santorum, and Donald Trump. Even Dick Morris is making an appearance. It’s a blast forward in time all the way to 2008 which, for the GOP, actually seems like the future since they are still acting as if it’s 1808.

If the allocation of speaking time for CPAC’s illustrious guests is any indication, they are firmly endorsing the backwards views of the conservative movement’s most moth-eaten mouthpieces. Palin and Trump, for instance, have been allocated 16 minutes and 14 minutes respectively. However, rising starlet Marco Rubio is getting only 11 minutes. That’s still better than Chris Christie who has been allotted zero minutes since he wasn’t even invited to attend. Not to worry though, there will be plenty to keep attendees occupied, including tributes to Andrew Breitbart and Ronald Reagan, and highly anticipated sessions with the NRA and the Tea Party.

What’s more, the tenor of the event is holding fast to the antiquated notions of Armageddon that were such a prominent part of the past four years of fear mongering. The conference is jam-packed with thrilling and frightful seminars like “Should We Shoot All the Consultants Now?,” “Are We Back on the Road to Serfdom?,” “Stop THIS: Threats, Harrassment, Intimidation, Slander, and Bullying from the Obama Administration,” “The United Nations vs. the United States: the End Run Around the American Way of Life,” and “Is America Coming Apart?.” I can’t wait to hear the answers to those questions.

Adding to the gaiety (bad choice of words?) of this ultra-modern affair is the dress code distributed by a media strategist in Chattanooga, Tennessee. Fashion, being one of the things for which right-wingers are best known, is not neglected this year. That’s why they are nixing T-shirts, jeans, sneakers, miniskirts, strapless necklines, halter tops, Uggs, Tom’s Shoes, leggings, and fancy shorts. See the colorful Infographic.

This is shaping up to be the most exciting CPAC yet. So stay tuned for updates from the speeches and panels that are surely going to advance the cause of conservatism into the nineteenth century.

3 thoughts on “CPAC: The Conservative Political Action Conference Sets Its Sights On The Future?”