It is becoming evermore inescapable that Breitbart “News” is run by the dumbest bunch of pseudo-journalists ever to disgrace the profession. Just a couple of weeks after freaking out over an alleged association between then-Defense Secretary nominee Chuck Hagel and the Freinds of Hamas (a terrorist group that, it turns out, does not exist), the BreitBrats are at it again. 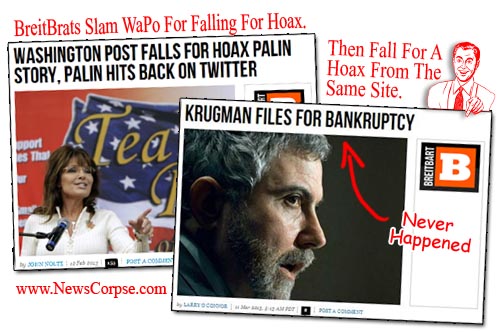 Media Matters caught Breitbart editor-at-large, Larry O’Connor, posting an article (now deleted) that claimed that Nobel Prize winning economist Paul Krugman had filed for bankruptcy. It was a juicy story for a conservative rag that would like nothing better than to discredit one of the shining lights of progressive media – a columnist for the New York Times no less.

Unfortunately for O’Conner, the story was utterly false. In fact, it was the work of The Daily Currant, a satirical web site. The thought of doing any actual reporting never entered into the minds of the BreitBrats or they would have quickly discerned that the article was a comical fake.

What makes this even more embarrassing is that just last month O’Conner’s fellow BreitBrat, John Nolte, went to great lengths to slam the Washington Post for having fallen for an article from the same site. Nolte’s pompous critique made some points that apply perfectly to O’Conner. He lambasted the WaPo author saying that…

Nolte: If [Suzy] Parker had a shred of self-awareness, integrity, and dignity, she would have changed the headline to “Too Good To Check,” and under it posted an essay about how shallow, smug, bitterly angry partisanship can blind you to common sense.

What part of that doesn’t reflect precisely the predicament in which O’Conner now finds himself? And why did the Breitbart site simply delete the phony article rather than adding a correction (which WaPo did) and an essay about angry partisanship and common sense. It should also be noted that the erroneous item on WaPo’s site was posted by a guest blogger not employed by WaPo, while the Breitbart screw up was by an editor.

The magnitude of hypocrisy here is off the scales. Breitbart never took responsibility for the phony Hamas story. They also never reported at all that their one-time Golden boy, James O’Keefe, had settled litigation against him for $100,000 in a case where he smeared an ACORN employee. And now they quietly sweep their brazen incompetence under the rug despite having made such a fuss about a similar recent situation.

Nevertheless, Breitbart’s site is still highly regarded in conservative circles, including Fox News, who frequently republish their tripe. It simply cannot be said enough that this is how right-wingers have become the most ignorant and misinformed people in America.